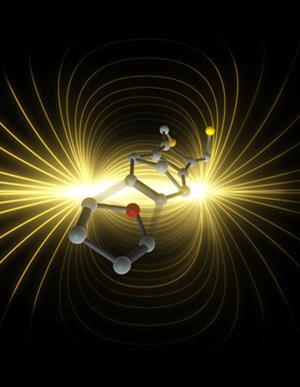 Electrostatic fields can catalyse non-redox reactions, specifically the Diels-Alder reaction, Coote and her team have shown

Scientists in Australia and Spain have shown electrostatic fields can speed up simple carbon—carbon bond-forming reactions,1 overturning a long-held chemical assumption. Michelle Coote from the Australian National University in Canberra and her coworkers changed reaction rate with the flick of a switch, giving organic chemists a potentially powerful new tool.

Electric fields are known to influence redox reactions that involve changes in an atom’s oxidation state, but hadn’t been thought to have a role beyond that, Coote says. ‘A key empirical rule in chemistry is that only temperature and concentration affect the rate of non-redox reactions,’ she adds. ‘We now believe these field effects would be almost universal, though with differing sensitivities. We deliberately chose a relatively non-sensitive reaction to demonstrate this.’

The researchers accelerated the Diels-Alder reaction, where two participating molecules, a diene and dienophile, combine to produce ring-shaped structures. They attached diene molecules to the tip of a scanning tunnelling microscope (STM), and arranged dienophiles on an opposing electrode. In an electric field aligned to favour electron flow from dienophile to diene, connections between the tip and electrode form five times faster than they would otherwise.

While this control is limited because it relies heavily on positioning molecules correctly, the chemists envision some circumstances that aren’t. For example, Coote highlights that it’s only necessary to break a few bonds to set off a self-healing polymer. ‘Having only a fraction of the bonds “facing the right way” at any point in time may not be a problem,’ she notes. The researchers are also already working on molecules on an electrode surface that could be selectively polymerised in patterns determined by an electric field.

Coote started investigating electric fields after finding some molecules could be stabilised by the electrostatic effect of a charged group.2 Exploring why, her team came across predictions that electrostatic fields might manipulate Diels-Alder reactions from Sason Shaik’s team at Hebrew University in Jerusalem, Israel.3 Coincidentally, University of Wollongong’s Simone Ciampi, a fellow member of the Australian Research Council Centre of Excellence for Electromaterials Science, was studying decolourising dye systems described by Shaik’s models.

Ciampi was also working with the University of Barcelona’s Ismael Díez-Pérez and Nadim Darwish, who held the key to testing Shaik’s predictions. Darwish had been attaching rigidly orientated norbornyl ‘molecular rulers’ to electrode surfaces, and studying their properties and reactivity with an STM.4 In particular the Barcelona scientists do ‘blinking’ experiments, where reactions between groups attached to the STM tip and on an electrode form fleeting electrical connections – the ‘blinks’. 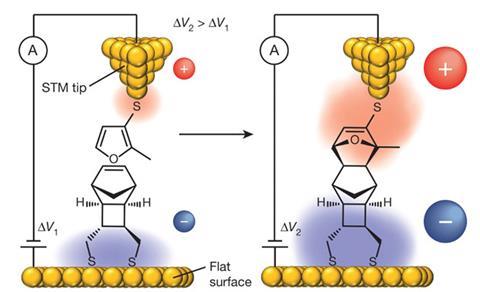 Together the researchers devised a system where each blink is a caused by the connection provided by a new Diels-Alder product. ‘The junction formed from the single-molecule product stays a short time and then breaks, likely from its weakest point, the contact of the molecule with the gold electrodes,’ Darwish explains. ‘It then disappears into solution, allowing another pair of reactants to meet.’

Electric fields can make charged arrangements of the transition state formed by the diene and dienophile more stable, Shaik’s modelling suggests. That in turn makes it easier to proceed from the transition state to the desired product. ‘The agreement between the response to the field predicted theoretically and observed experimentally is good evidence that the predictions are reliable,’ Díez-Pérez says.

Shaik, who was not directly involved in the work, is delighted. ‘This may change chemical synthesis completely,’ he enthuses. ‘Just imagine, you zap the molecule with an oriented external electric field and it clicks with another! At the moment this is not a quantitative synthesis, but it is a fantastic beginning.’

Leonhard Grill at the University of Graz, Austria, also says the result provides ‘exciting insight into a fundamental chemical process’. ‘Although the experimental setup is rather special, very impressive differences are reported for inversed polarities of the electric field, which is one of the most notable aspects of the work,’ he adds.