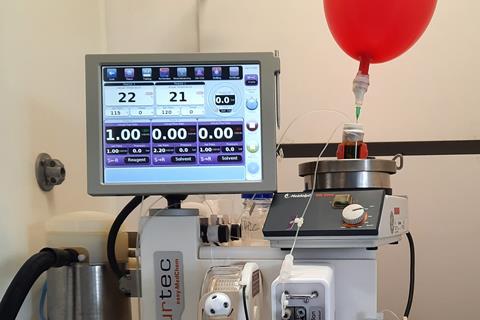 A greener strategy for functionalising double and triple carbon–carbon bonds has been developed by US scientists.1 The researchers borrowed an electrochemical technique from the energy storage field and applied it to organic synthesis, creating a new method that doesn’t require chemical reductants and is more efficient and selective than the classical approach.

Hydrogen atom transfer (HAT) – the concerted movement of a proton and an electron between two substrates – is a useful process with great potential in chemical synthesis. ‘Especially for the functionalisation of unsaturated carbon–carbon bonds, which are one of the most ubiquitous chemical functionalities organic chemistry has to offer,’ says Samer Gnaim from the Scripps Research Institute. ‘But due to technical difficulties, such as safety concerns, poor atom economy and expense, this reaction is still considered a niche tool in the chemical industry. We have introduced a fundamentally new concept that can solve these challenges, establishing HAT as an approachable instrument for both industrial and academic applications.’

Gnaim explains that in a common HAT process, an active transition metal hydride catalytic species is generated by exposing a suitable metal complex to an excess of reductant such as silane. In many cases, a peroxide or another oxidant is also required, he adds. ‘Our new electrocatalytic approach, inspired by the hydrogen storage field, can overcome this limitation.’ The process involves an electrochemically generated cobalt hydride species and doesn’t need any additives or complicated experimental protocols. 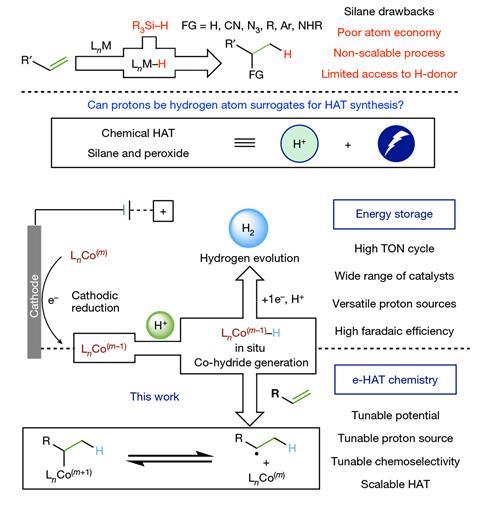 This technique has actually been known for several decades and is gaining importance as a promising and efficient way to produce hydrogen for energy applications. ‘The electrochemical approach is attractive because it uses electricity, which is a clean and renewable energy source,’ comments Smaranda Marinescu, an organometallic chemist at the University of Southern California in the US. She believes that the use of this strategy in organic synthesis has been limited by the knowledge of how to intercept the cobalt hydride species with organic substrates. ‘This method not only improves the sustainability, efficiency and scalability of the reactions, but it also allows for the synthesis of chemicals that can’t be obtained using the conventional techniques.’

Gnaim points out that electrocatalytic HAT (e-HAT) is versatile and can be applied to different types of reactions involving alkenes and alkynes, such as isomerisation, selective reduction and hydrofunctionalisation. The team selected alkene isomerisation as a model transformation (using tin as the cathode and cobalt bromide as the metal source), but depending on the reaction, different types of electrodes, proton sources and cobalt compounds are available. The researchers note that the system can be set up in minutes using a simple undivided cell and a commercial potentiostat. They also confirmed the scalability of e-HAT in both batch and flow configurations.

‘By combining various techniques, including analytical electrochemistry, kinetic analysis and computational studies, we managed to probe the elementary steps of this process,’ Gnaim says. ‘At the beginning, a low-valent cobalt species is formed by direct cathodic reduction.’ This species is then protonated to generate the cobalt hydride catalyst on site, so that the reaction can finally take place through a carbon-centered radical, which is in equilibrium with an alkyl–cobalt intermediate.

Gnaim mentions that the e-HAT approach has also led to the discovery of a new class of transformation called ‘e-selective alkyne semi-reduction’. ‘This kind of reaction wasn’t known in the HAT field before,’ he says. ‘The chemistry that can be achieved with our method proceeds with distinct chemoselectivity and sometimes even enables reactivities that can’t be recapitulated using purely chemical procedures.’