A conducting polymer has fundamentally changed the design of seawater batteries. Researchers in Germany have incorporated this specialised material into an efficient metal-harvesting device, able to extract and store the latent chemical energy present in seawater.

This chemical energy takes the form of redox potentials: seawater is around 3.5w/w% salt, which is present in the water as Na+ and Cl– ions. In reducing these Na+ ions to Na metal, seawater batteries store energy by harvesting this metal from the sea, oxidising it back to Na+ ions when energy is required from the cell.

The seawater battery can act as an energy efficient Na metal harvesting system (right) for long-term (seasonal/annual) energy storage and as a secondary battery (left), providing highly reversible and energy efficient short-term (from hours to one day) power-to-metal and metal-to-power storage

In a typical system, Na+ ions flow down a concentration gradient from seawater and into the body of the cell through a special ion-conducting membrane. Once inside, these ions diffuse through a solid electrolyte, eventually reaching the sodium anode where they are reduced to sodium metal. 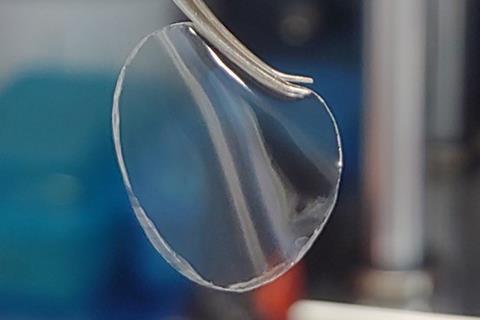 Now, a team surrounding Stefano Passerini at the Karlsruhe Institute of Technology has taken this design to a new level. ‘We developed a cell that can start without sodium metal inside, which makes everything much easier,’ explains Passerini. This anode-less design is made possible by the carefully engineered polymer electrolyte created by the team. Commercial solid-state batteries rely on either polymer- or inorganic-based electrolytes to transfer charge from one terminus to the other. ‘It’s a competition,’ explains Yan Lu, a battery researcher from the Helmholtz–Zentrum Berlin in Germany. ‘The inorganic-based solid electrolytes have much higher conductivity, but you need very high pressure so that’s a limitation. Polymer-based systems need higher temperatures to reach a certain ion conductivity.’

Comprised of the commercial polymer poly(ethylene)oxide, enhanced with sodium-ion salt and ionic liquid, the team’s polymer electrolyte demonstrates record conductivity at ambient temperatures, an important result across the field. ‘It’s a really great value,’ comments Lu. ‘Not only for this study, but for other applications.’ The presence of mobile sodium ions in the electrolyte also removes the need for sodium to be present on the anode, massively simplifying the manufacturing process. However, Passerini is keen to emphasise another benefit: ‘Instead of keeping the sodium in the cell [for immediate use], I want to store it somewhere else and reuse it when I need it.’ The energy storage capacity of this device is therefore theoretically limitless, as harvested sodium may continually be removed from the anode without affecting the performance.

Political pressure to invest in renewable resources and growing concerns surrounding energy security have increased the focus on this type of long-term storage strategy. ‘This system is very attractive for stationary storage,’ says Lu. ‘But it’s still at the initial stage. The set-up is a little complicated … but if they can further improve the electrochemical performance, lower the cost, and establish mass production, there will be a good future for commercialisation.’

The Karlsruhe team is continuing to work on energy storage systems as part of a number of collaborations across Europe and Asia. ‘I think [seasonal storage] is where people should work now,’ concludes Passerini.