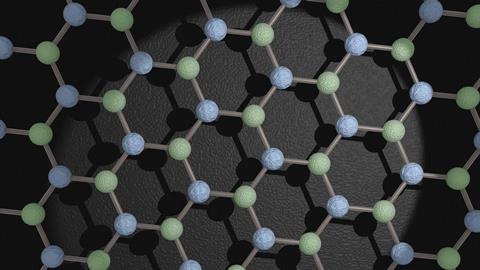 Researchers in the US have shown how tuning the electrical potential of a 2D semiconductor can dramatically increase its light output, a finding that could help these materials find new applications in optoelectronics.

2D, or monolayer, semiconductors such as molybdenum disulfide (MoS2) could one day enable engineers to produce ultrathin, flexible LEDs and solar cells. At present, however, they are woefully inefficient.

Illuminating a semiconductor with light of sufficient frequency generates excitons (electron-hole pairs). The most important parameter of any semiconductor used in optoelectronics is the photoluminescence quantum yield – the proportion of excitons that decay to generate more light. ‘That dictates the maximum theoretical efficiency you could ever get in any LED or solar cell using that material,’ explains Ali Javey of the University of California, Berkeley. In transition metal dichalcogenides such as MoS2, this is normally only about 0.1% – the excitons interact with structural defects such as missing atoms, stimulating the formation of bi-excitons (exciton pairs) and positive or negative trions (combinations of excitons with free electrons or holes, respectively). Both of these produce heat energy.

In 2015, Javey and colleagues reported that treating the surface of MoS2 with bis(trifluoromethane) sulfonimide (TFSI) increased its photoluminescence quantum yield 190-fold, but the technique’s effectiveness remained poorly understood. Moreover, say the researchers, industrial applications would be difficult. ‘In device physics you often need to put your sample through vacuum and various different solvents,’ explains Javey. ‘We often found the TFSI would go away.’

This time, the researchers took a different approach. Instead of chemically treating the MoS2, they encapsulated it inside a polymer, together with a gold electrode. They attached a dielectric layer and a counter-electrode to precisely control the potential of the semiconductor. They found that when no voltage was applied, the photoluminescence quantum yield of the sample was 0.1%. When they turned down the incident light intensity and applied a negative voltage to the counter-electrode, however, the quantum yield increased dramatically, reaching about 75% at -20V.

Molybdenum disulfide is naturally electron rich. With no applied voltage, the team therefore reasoned, a large proportion of the excitons would combine with free electrons to form negative trions. Applying a negative voltage to the back gate, however, was drawing free electrons away from the monolayer, allowing more excitons to remain neutral and decay to produce light. To test this hypothesis, they tested other dichalcogenide monolayers. Tungsten disulfide showed similar behaviour. Tungsten and molybdenum selenides, however – which naturally have roughly equal quantities of electrons and holes – showed their maximum quantum yields with no applied voltage.

This solves the mystery of why TFSI had such a dramatic effect on the photoluminescence quantum yield of MoS2, explains Javey. ‘TFSI is a known Lewis acid, so it was simply pulling electrons off the surface,’ he says. Turning down the incident light led to fewer excitons in the semiconductor, reducing the number of bi-excitons formed. This would be more problematic in a device. ‘If you’re using an LED then typically you want it to be very bright,’ says Javey. ‘We have ongoing projects in my lab to keep the photoluminescence quantum yield high at high exciton concentrations.’

‘This paper will have a huge impact if indeed it is the case that you can take any random monolayer semiconductor, no matter how many defects you have, do electrostatic doping and get very high photoluminescence quantum yield,’ says Andrea Ferrari, director of the Cambridge Graphene Centre in the UK. ‘It’s maybe not ideal to have real devices working at 20–50V, but I think the more important point is they’ve shown why the TFSI method – which we’ve used ourselves – works, which allows people to look for other ways to achieve the same result.’

Frank Koppens of the Institute for Photonic Sciences in Barcelona is also impressed. ‘I always thought that the quality of the material was limiting in these semiconductor monolayers and that it would take a long time to solve, but they seem to have done it in a rather simple way,’ he says. He cautions, however, that he would like to see more details before being completely convinced.