Engineered nanoparticles start up a conversation

Two-way molecular communication, analogous to the chemical signalling used by plants and animals to control their bodies and communicate with other organisms, has been demonstrated between inorganic nanoparticles by researchers in Spain. The research is a step towards producing co-operative nanoparticles, which could be useful in multiple areas of science and medicine.

From the invention of the telegraph to Web 2.0, humans have communicated using electromagnetic waves. This can be problematic at the nanoscale, as the technology needed cannot be miniaturised below the wavelength and the power requirements are prohibitive. Nature cracked this problem billions of years ago: organisms can send messages to other parts of their bodies using hormones and other chemical messengers. Humans have produced simple synthetic versions of this kind of molecular logic for controlled drug release and other applications, but the sophisticated multi-way chemical communication seen in nature has not been seen. 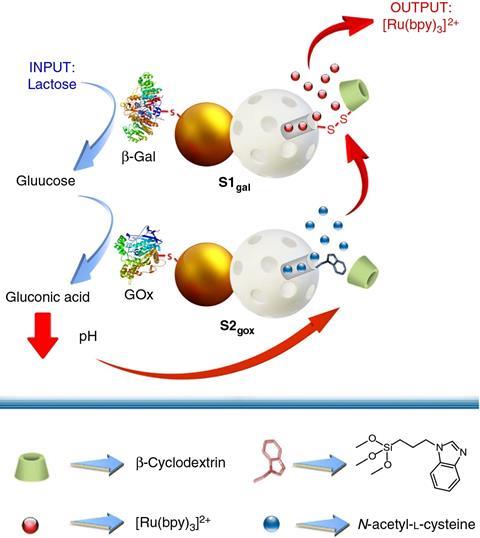 The two nanoparticles can communicate with each other using chemical messages

Ramón Martínez-Máñez and colleagues at the University of Valencia and Polytechnic University of Valencia, together with researchers at the Complutense University of Madrid, dispersed two types of nanoparticles, called S1gal and S2gox, in water. When lactose is added to the solution, an enzyme on S1gal hydrolyses it into galactose and glucose. The glucose is hydrolysed to gluconic acid by glucose oxidase on the S2gox. The resulting drop in pH opens a supramolecular nanovalve on S2gox, releasing N-acetyl-L-cysteine. This, in turn, ruptures disulfide linkages on S1gal, releasing a dye. Effectively, S1galsignals the presence of lactose to S2gox, which responds by signalling to S1gal to release the dye. ‘We are attempting to design more complex communication systems,’ says Martínez-Máñez. ‘We are also interested in coupling communication with movement. If nanoparticles can communicate they can behave co-operatively and mimic complex biological behaviors.’

Massimilano Pierobon of the University of Nebraska in the US agrees the paper is ‘very interesting’ and ‘can be the first brick to build up more complex systems’, although he says the idea that the system is a communication channel is ‘a bit of a stretch’ as the system cannot be reset and used to send further information. He also notes that ’many natural and programmable synthetic circuits have been demonstrated using DNA’. Sasitharan Balasubramaniam of the Waterford Institute of Technology in Ireland, however, sees a potential application in inorganic nano-robots. ‘To get them to communicate organically would be tough because the setup is all based on inorganic materials,’ he explains. ‘I can see the work could be integrated into these little nano-machines to allow them to communicate. It’s a very nice article.’