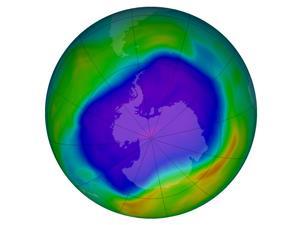 The Earth’s gradually healing ozone layer – an iconic success in humanity’s attempts to fix the environmental damage it causes – is being set back by unanticipated lingering pollutants. The biggest culprit is carbon tetrachloride (CCl4), of which a Nasa-led team has estimated 34,000–45,000 tonnes were emitted annually from 2000–2012, though it has been largely phased out. ‘The next step is to track down where the emissions are from,’ says Qing Liang from the Nasa Goddard Space Flight Center.

Some scientists have started seeking the unexpected releases, but their efforts are hampered by the overall success of controlling ozone-depleting chemicals. Paul Fraser from CSIRO, the Australian national science agency, who wasn’t involved in the Nasa-led study but is hunting carbon tetrachloride sources, notes there’s little funding available. ‘We could hasten recovery of the ozone layer by a few years if we could shut these emissions down, however this is unlikely,’ he explains.

Carbon tetrachloride was once heavily used by chemists as a cleaning and reaction solvent, and it was also exploited in dry cleaning and fire extinguishers. However, the Montreal Protocol, the international agreement to control chemicals that deplete atmospheric ozone, eliminated its production and consumption in the developed world by 1996. The rest of the world followed in 2010, although its use as a feedstock for other substances, such as hydrofluorocarbons, remains legal.

Also in 2010, the World Meteorological Organisation (WMO) projected that the ozone layer around Antarctica would return to its 1980s state seen by 2073 in its baseline scenario. The same report noted that carbon tetrachloride emission reductions haven’t matched those seen with chlorofluorocarbons, and that this couldn’t be explained. As such carbon tetrachloride now accounts for around one-tenth of all chlorine available for ozone depletion.

In their new research Liang and her colleagues note zero carbon tetrachloride emissions have been reported from 2007–2012. Using the 25-year lifetime of the compound in the atmosphere adopted by the WMO, levels should have fallen by 4% per year. Yet measurements reported by the WMO show it’s only dropped 1% annually.

The team reassessed the situation using Nasa’s 3-D GEOS chemistry climate model and ground-based observations from a global network run by the US National Oceanographic and Atmospheric Administration (NOAA). As well as estimating how much carbon tetrachloride has been released, they calculated it has a longer lifetime, around 35 years, which also contributes to higher atmospheric levels.

Up in the air

Although Liang’s team has received some funding to continue work on the problem, she highlights the need for more information. ‘To fully understand the sources and sinks requires more field and laboratory measurements to identify the likely chemical processes and quantify loss rates of carbon tetrachloride from the atmosphere.’

Meanwhile, Fraser and his colleagues have attempted to track down carbon tetrachloride emissions, focusing on Australia. They turned to data from the Advanced Global Atmospheric Gases Experiment (AGAGE) stations, some of which date back to the 1970s, focusing specifically on one at Cape Grim, Tasmania.

AGAGE principal investigator Simon O’Doherty, from the University of Bristol, UK, explains the sites take samples directly from the air and measure levels of various chemicals by gas chromatography. In both the NOAA and AGAGE networks, each substance found is quantified using either electron capture detectors (ECD) or mass spectrometry (MS).

Although Australia hasn’t imported, made or used carbon tetrachloride as a feedstock since the 1980s, Fraser and his co-workers found the country had emitted 150–180 tonnes annually from 2004–2011. The researchers investigated further, through air samples collected manually near possible sources and direct GCMS analysis at CSRIO’s Aspendale site, near Melbourne. ‘We found evidence of significant emissions from toxic waste landfills and possibly chloralkali plants,’ Fraser says. ‘We also identified a small source from the chlorination of water for swimming pools.’

Beyond his involvement in the Australian work, O’Doherty says his Bristol team has tried to locate the UK’s carbon tetrachloride emission sources, without success. He underlines that manual sample collection is labour-intensive and, therefore, highly dependent on funding. In the UK government funding priorities are shifting away from monitoring compounds regulated by the Montreal Protocol towards greenhouse gases covered by the Kyoto Protocol. Although carbon tetrachloride is also a greenhouse gas, 1400 times more powerful than carbon dioxide, it’s not included in that group.

Fraser adds that satellites could, in theory, provide the high density of observations still needed, but that this is years away, if it happens at all. He hopes that regional monitoring networks currently being designed that primarily target Kyoto Protocol gases will be up to the task. ‘In Australia we likely need one high-frequency observing site strategically located near each major city,’ he says. ‘This is not expensive but currently resources for this type of work are not expanding, and are likely shrinking.’