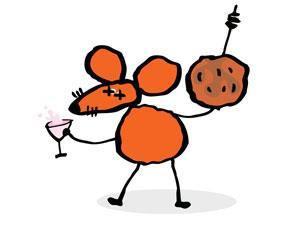 Scientists in the US and China have invented a way to encapsulate teams of enzymes in a thin polymer shell. This enables the enzymes to carry out a series of sequential reactions within an enclosed space – as happens in nature. The researchers illustrated the utility of their system by sobering up drunken mice with a packaged enzyme complex that metabolises alcohol.

‘In eukaryotic cells, most enzymes do not freely diffuse within the cytosol, but are spatially defined within subcellular organelles or closely co-localised as enzyme complexes along with other enzymes,’ explains team member Yunfeng Lu, of the University of California, Los Angeles. ‘In consecutive reactions catalysed by multiple enzymes, such close confinement minimises the diffusion of intermediates among the enzymes, enhancing overall reaction efficiency and specificity. Meanwhile, toxic intermediates generated during a metabolic process are promptly eliminated by the nearby enzymes co-localised within the confined structures.’

Lu and his colleagues have devised an ingenious way to bring multiple enzymes together in close proximity and spin a polymer cocoon around them, creating in effect a synthetic organelle. The first step is to identify inhibitors – molecules that will specifically attach to a given enzyme. A number of different inhibitors – each specific to its own enzyme – are then linked by a string of DNA. In the presence of the different enzymes, each inhibitor hooks its own enzyme, trapping them around the DNA scaffold and creating a complex.

‘We then wrap each enzyme complex within a thin layer of a polymeric network using an in-situ polymerisation technique,’ says Lu. The enzymes have previously been decorated with acryloyl groups. Acrylamide monomers attach to these, and in the presence of an appropriate initiator and cross-linker, a thin cross-linked polyacrylamide shell grows around the complex. Gentle heating then removes the DNA scaffold and inhibitors, leaving the functioning enzymes encased within the polymer. 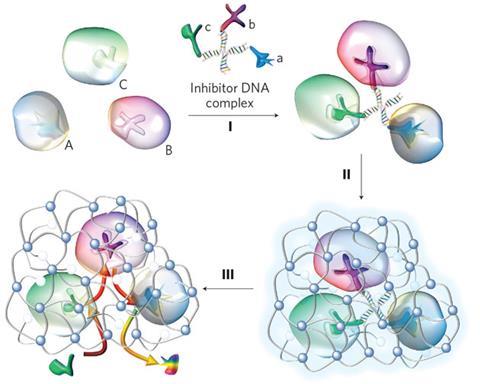 The team demonstrated the concept with a complex of alcohol oxidase and catalase, capable of removing alcohol from the bloodstream. Alcohol oxidase oxidises ethanol to acetaldehyde and hydrogen peroxide. The latter is highly toxic, and this is decomposed by the catalase to oxygen and water.

To demonstrate the efficacy of the complex, the researchers first fed alcohol to mice. ‘The animals became intoxicated rapidly and passed out within minutes,’ says Lu. Mice that were subsequently injected with the enzyme complex recovered faster than untreated mice, with their blood alcohol levels reducing by around 35% over three hours, compared with insignificant reductions in the untreated mice.

Woei Ping Cheng, an expert in nanotechnological drug delivery systems at the University of Hertfordshire, UK, is impressed by the study. ‘It is a very novel and exciting piece of work,’ she says. ‘Encapsulation of enzymes typically involves fabrication of delivery systems, such as liposomes or nano-carriers, first and then the enzymes are encapsulated into the carriers passively. This is especially challenging if we want to encapsulate a number of enzymes where we cannot control the spatial arrangement of the enzymes or the interaction of these enzymes within the carriers. This novel method seems to overcome this challenge by ‘fixing’ the spatial arrangement of the enzymes and then encapsulating them to ensure that each of the enzyme is in the right place within the nano-capsule, an idea which I thought was very unique and neat.’

As well as providing a route for a possible antidote to alcohol poisoning, Lu says that the method can be generalised for different combinations of enzymes. ‘Through judicious choice of enzymes, we expect to be able to construct a novel class of complexes with programmable, complementary or synergistic functions.’