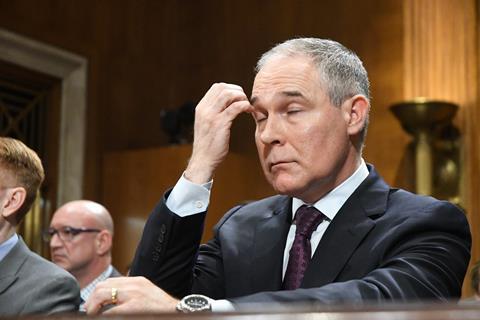 Scott Pruitt, the former head of the Environmental Protection Agency, has left the organisation after becoming ensnared in a number of scandals

Scientists who advise the US Environmental Protection Agency (EPA) are joining with environmental organisations in celebrating the resignation of Scott Pruitt, the agency’s embattled director. Pruitt left the agency under a cloud after being caught up in a number of scandals linked to expenses and reports of secret diaries and controversial meetings that were hidden from the public.

‘Good riddance,’ says Joseph Rodricks, a toxicologist specialising in risk analysis who helped found the environmental and health consulting firm Ramboll Environ and sits on various EPA science panels. ‘Pruitt has taken so many actions which are destructive, it is hard to believe that they are science-based,’ Rodricks continues. ‘He was removing lots of regulations and programmes from earlier administrations – where does science feed into that?’

All evidence points to the conclusion that Andrew Wheeler, the new acting administrator, will continue with the administration’s deregulation policies

Michael Brune, executive director of environmental group the Sierra Club, expressed similar sentiments. ‘Scott Pruitt was the worst EPA administrator in history, and any president that cared about protecting taxpayers, respecting science, tackling the climate crisis or protecting the environment would have fired him months ago,’ he said.

Pruitt’s tenure at the EPA was plagued by numerous scandals involving excessive spending on first-class travel and security, as well as potential conflicts of interest. Pruitt is the subject of over a dozen federal investigations.

He came under fire from environmentalists for working to roll back Obama-era regulations like the Clean Power Plan that set the first-ever US limits on carbon emissions from coal-fired power plants. The scientific community also loudly protested many of Pruitt’s actions, including new rules he issued that purport to increase the EPA’s transparency but could hamper its research to set regulations, as well as his decision to ban scientists whose work is being funded by the EPA from serving on its science advisory boards.

Rodricks notes that many senior EPA scientists departed the agency during the current administration. ‘I know a very highly placed scientist in the agency who was there, and Pruitt never even contacted him or met with him, so he left,’ says Rodericks, who sits on the EPA Board of Scientific Counselors (Bosc).

According to Rodricks, neither the Bosc nor its water resources subcommittee, which he chairs, has held any meetings since Trump took office. ‘I was glad to be asked to join the Bosc, and it was great fun for two years, and then it just kind of stopped,’ he tells Chemistry World. ‘I hope it is reassembled properly.’

Rodricks’ subcommittee is supposed to convene once or twice a year to review agency research in the area of water safety and sustainability. ‘They said that would probably happen in the fall, but that has not been confirmed,’ he says. Meanwhile, Bosc is expected to meet two or three times annually, but has also not convened since Trump took up residence in the White House. Rodricks worries that Pruitt’s successor – former coal lobbyist Andrew Wheeler – will ‘continue destroying the agency and its mandate’.

Christine Todd Whitman, who ran the EPA under former Republican President George W Bush, is also not hopeful. ‘Wheeler is someone who the president is very comfortable with, and is a big supporter of coal and has a bias toward industry,’ she says. ‘I don’t expect things to change very much.’

Whitman says Pruitt ‘didn’t care about science – if the science wasn’t telling him what he wanted to hear then the science was wrong’. She suggests that Wheeler might be more willing to consider issues and listen to scientists from sectors other than industry.

Wheeler worked at the EPA’s Office of Pollution Prevention and Toxics under former presidents George H W Bush and Bill Clinton, as well as on Capitol Hill. As he is more familiar with how the government works, he could be more effective at rolling back environmental regulations, according to Whitman.

‘A lot of what Pruitt did was for public consumption, and he didn’t provide the legal arguments behind his actions – he really did things for the headlines and then he’d move on to the next thing,’ Whitman states. ‘Wheeler will be much more methodical about how he rolls back things, which means that the rollbacks will be more permanent.’

Deborah Swackhamer, an air pollution expert with the University of Minnesota who is the former Bosc chair, agrees. ‘All evidence points to the conclusion that Andrew Wheeler, the new acting administrator, will continue with the administration’s deregulation policies but do it more quietly – so he may in fact be even more effective,’ she says. ‘Time will tell.’

The chemical industry is one sector that appears to be disappointed by Pruitt’s departure. Upon news of his resignation, the National Association of Chemical Distributors’ president, Eric Byer, thanked Pruitt for ‘reducing the unnecessary regulatory burden on the business community by EPA’. Byer also expressed his appreciation for Pruitt’s efforts in ‘rolling back of the onerous Risk Management Program rule’, an initiative to strengthen transparency in science in the rulemaking process.