EPA chief says members of its scientific advisory panels get ‘millions of dollars’ in grants from the agency, which poses conflicts of interest 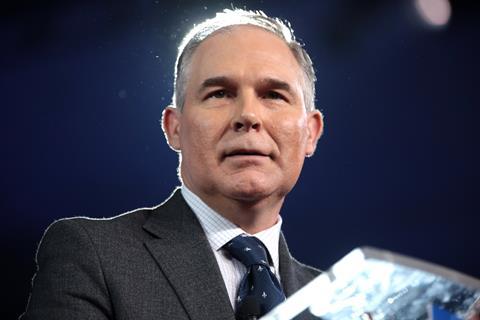 Head of the EPA Scott Pruitt plans to exclude scientists from advisory boards if they have received grant money from the agency. Scientists who work for businesses face no similar conflict of interests ban

A forthcoming US Environmental Protection Agency (EPA) directive that will ban scientists from serving on any of its scientific advisory committees if their research is funded by the agency could mean a decline in evidence led regulations, the academic research community is warning. Scientists have called the move ridiculous, adding that it is precisely because these scientists are working on EPA funded research that they are best placed to advise on regulatory issues.

The controversy began on 17 October, when EPA head Scott Pruitt announced the new policy during a speech before the conservative Heritage Foundation thinktank in Washington DC. He called out the agency’s clean air scientific advisory committee as well as its science advisory board and board of scientific counselors (Bosc), saying that the scientists sitting on these panels have collected ‘substantial monies’ through EPA grants. ‘If we have individuals on those boards receiving money from the agency […] to the tune of tens of millions of dollars over time, that to me causes question on the independence and the veracity and the transparency of those recommendations that are coming our way,’ Pruitt said. He argued that it is crucial for the EPA to have scientific advisers who are ‘objective, independent-minded and provide transparent recommendations’.

Members of the review panels in question, as well as science advocates and environmental groups, balked at Pruitt’s announcement. ‘This is nothing more than a thinly veiled attempt to try to exclude sound scientific expertise from these advisory committees, and is consistent with efforts to pack these committees with non-science-based interests,’ says Mark Wiesner, a Duke University civil and environmental engineer who sits on the Bosc.

Earlier this year, the Trump administration’s decided not to renew the membership of half the scientists serving on the Bosc. At the time that decision was made, Pruitt argued that the committee should be filled with people who understand the impact of regulations on the regulated community.

Academics who have served on the EPA advisory committees told Chemistry World that it was hypocritical for the Trump administration to have pushed for more industry representation, but now argue that university researchers supported by government funding have unacceptable conflicts of interest.

Joel Rodricks, an expert in toxicology and risk analysis and a founding member of the environmental and health consulting firm Ramboll Environ, argues that excluding people who are funded by the EPA doesn’t make sense. ‘Those are the people who understand the science and are best able to judge the research,’ says Rodricks, who served on the Bosc until he was dismissed earlier this year. ‘My term was not even up, and I was told indirectly that I would not continue.’ Rodricks has reapplied to sit on the panel, and says he doesn’t know if he’ll be asked to serve again. ‘As far as I know, the entire Bosc no longer exists,’ he adds. He says the EPA never provided a complete explanation about why it essentially terminated all of those members and cancelled future meetings. The panel hasn’t met for about a year, according to Wiesner.

Similar sentiments are expressed by Wayne State University pharmacology professor Lawrence Lash, who is a member of an EPA chemical assessment committee. ‘Absolutely makes no sense whatsoever,’ he said in an emailed statement. ‘Pruitt would not know a conflict of interest if it slapped him in the face,’ he adds. ‘Having grant money from the EPA has absolutely nothing to do with advising the EPA on the underlying science.’

Lash adds that it’s simply not true that most scientists who serve on the scientific advisory boards receive at least some EPA grant support for their research. He himself last received EPA funding for his work in 1999.

Lorenz Rhomberg, a principal with the environmental and risk sciences consulting firm Gradient, agrees. ‘If you take too hard a line on this – like if you get an EPA grant you are excluded in a blanket way – it invites a hard line push on the other end and makes it hard to argue that people from industry can be on these advisory panels,’ cautions Rhomberg, who has worked at the EPA for 10 years doing quantitative risk assessment.

‘This move by EPA is a direct blow to the scientific integrity that the Agency has always previously valued,’ says Deborah Swackhamer, an environmental chemist from the University of Minnesota who served as the chairwoman of Bosc. ‘To simply disqualify a whole bunch of excellent scientists is throwing the baby out with the bath water. It guarantees a less qualified set of advisers, and is a clear attempt by the administrator to remould these boards to his own liking, so that they will support his deregulation agenda rather than provide objective advice.’