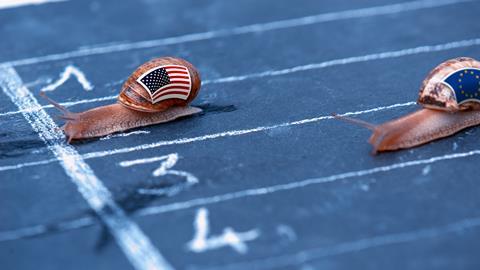 Europe trailing the US on top science

The EU lags far behind the US when it comes to producing highly cited research, according to analysis by a Spanish–US team. The EU might mass produce research papers but this does not make it a leading scientific power, they argue. In terms of research efficiency, the EU has a big problem the authors contend.

Alonso Rodriguez-Navarro of the Technical University of Madrid and Francis Narin of CHI Research – now The Patent Board – a US scientometrics company, investigated papers published every three years in chemistry, physics, biochemistry and molecular biology, and clinical medicine from 1990 to 2011. They took the approach that important science can be expressed as highly cited papers (among the top 500), very highly cited (top 100) and Nobel prizes.

Their analysis found that, at the upper end of the research continuum, where important discoveries are made the US’s performance is between one-and-a-half to three times stronger than that of the EU, depending on research area and method of calculation. These findings mean that the ‘European paradox’ – outstanding EU scientific performance but second-rate economic performance – is ‘misleading’, and that the EU is only an outstanding performer when considering total number of research papers published.

In chemistry, between 1990 and 2011, the EU published 40,000 papers and the US 18,000. But the US had 362 papers in the top 100 very highly cited papers, compared to the EU’s 190. The pair conclude that the EU’s problem is that its research policy is based on incorrect assumptions about the excellence of its research. ‘This erroneous notion of excellent research and weak innovation is spread among research policymakers,’ the two write. ‘Ultimately, research funding is improperly allocated.’

The researchers blame ‘bureaucratic meddling’ and the EU’s ‘chronic failure’ to encourage ambitious entrepreneurs for driving much of European science away from significant, highly cited discoveries. Instead, researchers end up pursuing the large-scale production of ‘relatively superfluous papers, in order to satisfy inappropriate, bureaucratic, publish or perish criteria’.

However, Kieron Flanagan, a science policy expert from the Manchester Business School, UK, says the conclusions drawn are very simplistic. ‘The European paradox is not the whole story and hides a lot of diversity within Europe.’ Furthermore, he would not blame the EU for the figures. ‘EU funding and policy accounts for a tiny part of Europe’s scientific efforts. Design flaws in the European programmes can only possibly account for a small portion of any problem – the much bigger proportion will be accounted for by national problems.’