A model that recreates how perfluoroalkyl substances (PFASs) degrade in the presence of excess electrons is the first to detail how the process happens in real time. The molecular dynamics simulation, created by scientists in the US, could help find a way to remove the contaminants from drinking water.

‘Water purification is a global crisis that has a tangible but dramatic effect on human life,’ comments Bryan Wong, who led the investigation at the University of California, Riverside. ‘Specifically, only 2.5% of the world’s water is drinkable, and finding ways to remediate these scarce resources effectively is central to sustaining life on Earth.’

PFASs are a group of over 4,700 chemicals that are used in non-stick cookware, stain-resistant textiles, food packaging and cosmetics. They contain carbon–fluorine bonds, which are incredibly strong and difficult to break down, making them toxic when they accumulate in the body. As such, researchers are trying to understand how these compounds degrade.

Wong’s investigation is the first to probe the degradation dynamics of PFASs in real time, as previous approaches were static or limited to after degradation had occurred. Those shortcomings made it difficult to determine the actual degradation mechanism, until now. 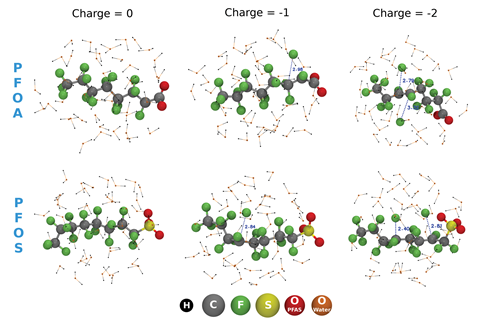 ‘In the real world, these electrons could be a hydrated electron from an external source, such as that generated from the UV-treatment of water, or it could come from some other surrounding chemical species,’ notes team member Sharma Yamijala.

The team was surprised to observe ultrafast (<100 fs) dissociation of the strong carbon–fluorine bonds in the PFASs on addition of extra electrons. Both PFOA and PFOS were defluorinated and the number of dissociated carbon–fluorine bonds was proportional to the number of additional electrons in the simulation. The team also saw a carbon–carbon bond (the breaking of which can form toxic byproducts) transform into a carbon=carbon bond, an intermediate that might further unpick the degradation pathway.

‘Longer simulation time-scales are required to predict further reaction products, and these calculations are under progress in our group,’ says Yamijala. Such studies will also seek to identify toxic intermediates.

‘This work should motivate further research in reductive methods for PFASs remediation,’ comments Brian Chaplin, an environmental engineer at the University of Illinois at Chicago, US. ‘Much of the past work in PFASs remediation has focused on oxidative methods, which are prone to toxic byproduct formation. Reductive methods have an advantage of being more selective and have a lower risk for side reactions. The next step of research in this area should focus on identifying catalysts that can promote defluorination.’