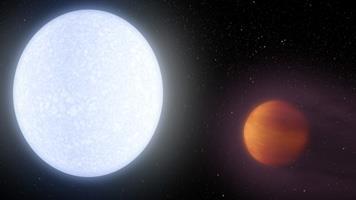 KELT-9b orbiting its host star, KELT-9. It is the hottest gas giant planet discovered so far

A hot gas giant whose atmosphere is made up of iron and titanium vapours has been discovered 650 light years away from Earth.1

Located in 2016 in the Cygnus (swan) constellation, the exoplanet Kelt-9b is a gas giant, not unlike Jupiter. But while the average temperature on Jupiter is a chilly –145°C, Kelt-9b’s atmosphere gets heated to more than 3700°C as it orbits a star twice as hot as the sun. Viewed from the planet’s surface, its blue star would appear 70 times the size of the sun in the Earth’s sky.

Indeed, Kelt-9b is so hot that heavy metals get vaporised into individual atoms. Iron molecules, iron cations and titanium cations form a haze around the exoplanet, scientists have discovered. Using a spectrograph at the Galileo National Telescope on the island of La Palma, Spain, they recorded the metals’ telltale spectral lines as Kelt-9b passed in front of its star.

This is the first time iron has been found on an exoplanet. With a boiling point of 2862°C, it is usually confined to solid or liquid states and therefore hard to detect by absorption spectroscopy.

Just a few months ago, Kelt-9b’s atmosphere was found to be made mostly of hydrogen.2 The researchers behind the new study now hope to search for carbon monoxide and water.