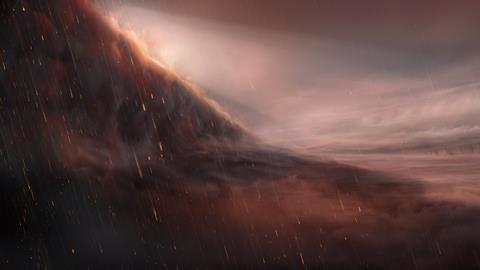 The weather forecast for ultra-hot exoplanet Wasp-76b might read something like this: tonight, and every night, we expect iron clouds and, throughout the night, molten iron rain.

Scientists discovered Wasp-76b in 2013. The planet orbits around a star almost 400 light-years away from Earth. Wasp-76b is tidally locked to its star, meaning that its surface is around 2000K (1727°C). Its dayside is so hot that matter exists mostly in the form of individual atoms and ions.

Researchers have now discovered that the iron that exists in Wasp-76b’s atmosphere likely condenses as it is blown from the dayside to nightside. The team compared spectroscopic data of the planetary disc’s two outer edges, finding iron atomic absorption signals only at the day-to-night transition.

Iron likely forms clouds during its journey across the nightside, and might fall as liquid iron rain.