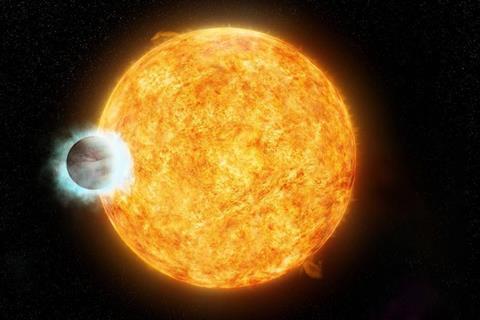 A heavy metal oxide has been spotted for the first time in transmission spectra from a gaseous ‘hot Jupiter’ planet outside our solar system.

The planet, WASP-19b, is as big as Jupiter but much hotter – reaching temperatures of around 2000K. Scientists had spotted lighter elements such as hydrogen, oxygen, carbon, sodium and potassium in similar planets before by analysing light from them, but never heavier elements.

Light from WASP-19b was detected using the Very Large Telescope and FORS2 spectrograph at the European Southern Observatory near Santiago, Chile. Astronomers used various models to interpret the spectra and found peaks corresponding to titanium oxide (TiO), as well as sodium metal and water.

They say that the presence of TiO might alter the opacity of the planet, which could lead to strong day–night temperature gradients in the atmosphere. It may also cause temperature variations in the atmosphere that the Hubble or James Webb space telescopes may identify in the future using high-precision instruments to detect thermal radiation from this and other hot Jupiter planets.