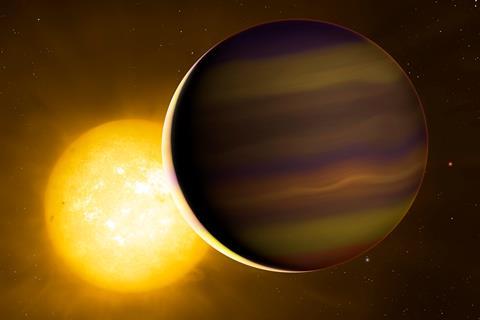 Artist’s impression of exoplanet HD 209458b transiting its star. The illuminated crescent and its colours have been exaggerated to illustrate the light spectra that the astronomers used to identify the six molecules in its atmosphere

An international team of scientists has analysed the first transiting exoplanet ever discovered and found six different chemicals in its atmosphere. Examining the planet’s spectra as it transited its star the astronomers were able to detect hydrogen cyanide, methane, ammonia, acetylene, carbon monoxide and small amounts of water in the atmosphere of the planet, known as HD 209458b and nicknamed Osiris. The findings suggest that its atmosphere contains more carbon than oxygen, which indicates that its birthplace was far further out than its current 7 million km orbit of its star.

The surprising abundance of carbon-based molecules shows that there is approximately as much carbon as oxygen in the planet’s atmosphere, which is double the amount expected. That suggests that Osiris has preferentially accreted gas rich in carbon during formation, which is only possible if it orbited much further from its star when it originally formed, most likely at a similar distance to Jupiter or Saturn in our own solar system.

‘There is no way that a planet would form with an atmosphere so rich in carbon if it is within the condensation line of water vapour. At the very hot temperature of this planet (1500K), if the atmosphere contains all the elements in the same proportion as in the parent star, oxygen should be twice more abundant than carbon and mostly bonded with hydrogen to form water or to carbon to form carbon monoxide,’ explained study co-author Siddharth Gandhi, a physicist at the University of Warwick. He said that this study supports the current understanding that hot Jupiters like Osiris, which are gas giants orbiting close to their parent stars, form far from their current location.

The researchers expect that new, more powerful telescopes will eventually enable their technique to help determine the chemistry of exoplanets that indicate potential habitability. ‘It’s really important that we don’t work under the assumptions that there is only a couple of molecular species that are important to determine the spectra of these planets, as has frequently been done before,’ stated study co-author Matteo Brogi, an astronomer at the University of Warwick. ‘Detecting as many molecules as possible is useful when we move on to testing this technique on planets with conditions that are amenable for hosting life, because we will need to have a full portfolio of chemical species we can detect,’ Brogi added.