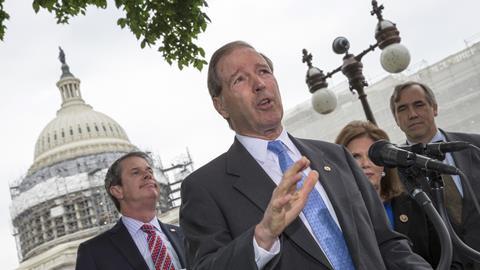 Can US chemical regulation be fixed? Chemistry World helps you to make sense of the new law controlling America’s chemicals

Calls to modernise the 40-year-old law regulating chemicals in the US have become louder and louder, amid recognition that it has failed to police the country’s chemicals. However, political bickering has prevented any revamp of the law during several years of contentious negotiations. Meanwhile, about 85,000 chemicals are on the market in the US, with hundreds of new ones introduced every year.

How are chemicals regulated in the US at the moment?

The Toxic Substances Control Act (TSCA) – nicknamed ‘tosca’ by policy wonks – was passed in 1976 in the US following a string of chemical scares in the late 1960s and early 1970s. Tosca was designed to regulate chemicals and gives the Environmental Protection Agency (EPA) the authority to demand that industry keeps records on the chemicals it uses and produces, and also to restrict their use. The law doesn’t cover drugs, cosmetics and pesticides though, which are regulated by different laws.

Under the current law, a list is kept on every chemical manufactured or used in the US. While no judgment is passed on the toxicity of chemicals on this list, if their name isn’t down they’re not coming in (or made in the US).

What’s wrong with the current law?

Currently, tens of thousands of compounds have never been subject to safety tests because they were on the market before the law was passed in 1976. Approximately 62,000 chemicals already on the market were ‘grandfathered’ in when tosca was enacted, and the new law had little power to investigate them. Tosca only requires that chemical manufacturers submit information about the production, use, exposure and environmental fate of new chemicals. Many argue that it falsely equated a lack of any safety data with a lack of risk.

Currently, a new chemical has to be shown to pose an ‘unreasonable risk’ before more information can be requested. Making a call on the risk a chemical poses is difficult to do without more information, however. This had led many observers to call tosca ‘toothless’.

Did tosca achieve anything?

During tosca’s 40-year run only a little over 200 chemicals have been assessed out of roughly 85,000 chemical substances in its inventory. Only five chemicals (or classes of chemical) have been banned or restricted under the law: polychlorinated biphenyls, halogenated solvents in aerosols, dioxin waste, hexavalent chromium in air conditioning units and asbestos. In addition, certain uses of three metal working fluids have also been limited. 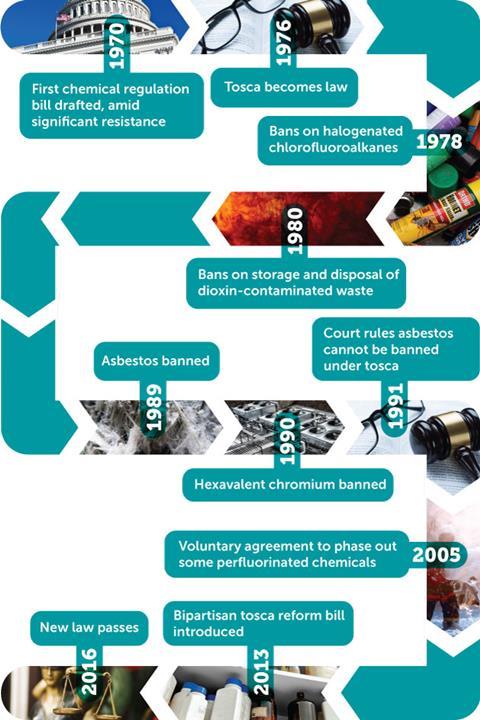 You may be surprised to learn that despite being targeted under tosca, cancer-causing asbestos is not banned in the US. In 1989, most asbestos products were banned but this was overturned in court in 1991 over a lack of evidence to justify such a broad ban. The court did agree that new asbestos materials could be outlawed though.

The failure to modernise tosca has left individual states trying to fill the void. At least 18 states, most notably California, have introduced stricter chemical controls. It’s estimated that states have together passed dozens or even hundreds of chemical safety laws, creating a confusing ‘patchwork’ of standards across the country.

How does the new law compare with the old?

The new law would, for the first time, require a safety review of all chemicals on the market in the US. Chemical safety assessments will have to be completed to tighter deadlines, with priority given to those substances of most concern. The new tosca has teeth – it gives the US’s environmental agency new powers to obtain information on chemicals, and mandates safety tests before they can be sold.

The reformed law also addresses a controversial aspect of the current law that allows companies to keep some chemical information confidential to protect trade secrets. Chemical manufacturers say such a provision is essential to preserve their competitive advantages, but health and environmental advocates argue that potentially important information is withheld. The new law makes it more difficult for a chemical manufacturer to claim certain data as a trade secret.

Despite broad agreement that tosca needed fixing, political wrangling halted efforts to reform it. The Democratic sponsors of earlier attempts to re-write it believed that extensive changes were needed to reign in the chemical industry and protect the public and environment. The chemical industry and its advocates, however, thought that the changes they were proposing were too extreme, threatening innovation and trade secrets.

A compromise brokered in 2013 proved popular as it balanced stronger chemical regulation, while promising to protect firms’ trade secrets.

The new tosca is quite a different beast to the EU’s Reach regulation. Under Reach, the burden of showing each new chemical is safe rests on industry, with firms having to conduct and submit testing data. Under tosca this responsibility rests with the EPA.

Will the new law fix chemical regulation in the US?

While the tosca revamp removes the major legal hurdles when it comes to evaluating chemicals and restricting their use, some say it won’t fix what ails the current law. They stress that the EPA needs far more money if it is to effectively police the thousands of chemicals on the market.

There are also concerns that tosca 2.0 could actually make it harder to control chemicals by making it more difficult for states to pursue their own tougher laws. Another fear is that the new law may make it harder for firms to be held liable when their products damage the environment or people’s health. Depending on how the issue of the new law’s primacy over states’ own rules is resolved, the revamped tosca could have an impact on people’s ability to sue for personal injury or loss.

There are other practical concerns. Groups like the Union of Concerned Scientists suggest that it could more than 50 years to assess even 1000 of the most toxic chemicals on the market.

The EPA already has a huge backlog of chemicals to address, on top of a steady stream of new ones entering the market. Assessing and regulating these compounds will require many more scientists and technicians and that won’t happen overnight. An expansion of the payroll of the EPA is also something that most Republicans are unlikely to embrace.