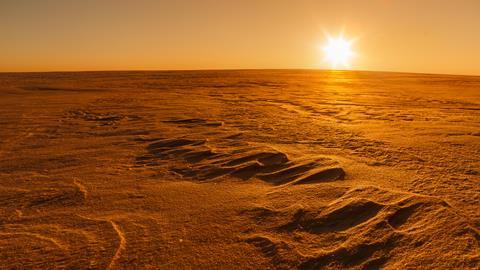 Chemistry required to support microbial life, similar to what exists deep underground in the darkest places on Earth, is also occurring in the subsurface of Mars. That is the conclusion of new research led by scientists at Brown University and the University of Toronto, which examined the chemical composition of Martian meteorites that landed on Earth and also analysed data from Nasa’s Curiosity rover, as well as other orbiting spacecraft.

In the deep continental subsurface of Earth, where groundwaters are often isolated for more than a million or even a billion years, energy released by radionuclides within rock produces oxidants and reductants that drive metabolisms of non-photosynthetic microorganisms. The sulfate-reducing microorganisms that are common in Earth’s deep subsurface often use hydrogen derived directly from radiolysis – bond breaking by radiation – of water and sulfate derived from oxidation of sulfides in rock by radiolytically derived oxidants. The team showed that radiolysis by itself could produce sufficient redox energy to sustain a habitable environment in the subsurface of present-day Mars, one in which Earth-like microorganisms could survive in the presence of groundwater.

The study confirmed that the key ingredients for radiolysis – such as the radioactive elements thorium and uranium – exist in various types of Martian meteorites. The researchers found that regolith breccias, which are meteorites from 3.6 billion-plus year old crustal rocks, seem to have the highest potential to support life.

’A possible next step in Mars exploration is to send dedicated missions to search for groundwaters and explore the subsurface,’ says Jesse Tarnas, a postdoctoral researcher at Nasa’s Jet Propulsion Laboratory who led the study while completing his PhD at Brown. ’Based on our results, there’s a high chance that any discovered groundwaters could be habitable today, making them excellent targets to search for modern-day Martian microbial life, if any do in fact exist.’

Jack Mustard, an earth, environmental and planetary sciences professor at Brown who co-led the research, noted that Mars’ surface and atmosphere have been well investigated, but not its subsurface. Studying the former two frontiers will reveal important information about Mars’ past but the latter can offer significant insights about present-day life on the planet, he said.