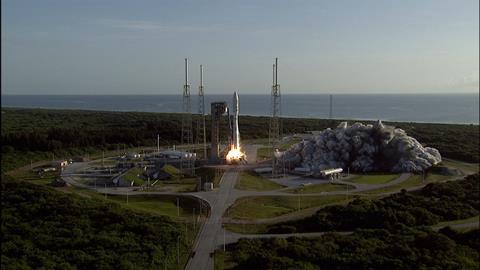 Following its launch from Florida, US, on 30 July 2020, Nasa’s latest rover Perseverance is now hurtling through space on a seven-month journey to Mars. Once there, the rover will search for signs of ancient microbial life while characterising the geology and climate on the red planet. What’s more it will cache samples that are intended to be brought back to Earth in a future mission.

‘It was an incredible relief to see the rocket engines start to fire!’ says Ken Farley at the California Institute of Technology, who is the lead project scientist on Nasa’s Mars2020 mission team. ‘Getting the spacecraft over the finish line in the time of Covid has been a challenge, one that at times I feared we would not overcome. So now the team can breathe a little easier, at least until February 18, 2021 when landing commences.’

Nasa’s previous Mars rover Curiosity, which landed in 2012, had a suite of instruments that were able to detect organic molecules and possible life-supporting environments including an ancient lake. Perseverance looks much like a clone of Curiosity but has new instruments that could help answer the long standing question: has life ever existed on Mars?

‘While Viking [in the 1970s] attempted to find evidence of extant life, Perseverance will be looking in ancient rocks deposited under conditions that appear to have been habitable by terrestrial life,’ says Farley. ‘Perseverance is the natural outcome of the arc of martian rover exploration – follow the water – identify and characterise habitable environments – seek signs of ancient life.’

Perseverance’s landing destination is the Jezero crater, which is thought to have been a lake 40km in diameter and several hundred metres deep some 3.5 billion years ago. With the help of new accurate landing technology, Perseverance can safely land in rocky sites that would have previously been too risky.

‘The ancient Jezero crater setting appears to be very similar in conditions and in age to the rocks that contain the oldest undisputed evidence of terrestrial life in the Pilbara region of Western Australia, at about 3.5 billion years ago,’ says Farley. ‘The mud deposited on the lake bed is an excellent place to seek biosignatures.’

Some of the instruments that will help Perseverance assess the origin and history of martian geology include SuperCam – an upgrade to Curiosity’s ChemCam – which uses lasers and spectrometers to identify potential chemical biosignatures in rocks and debris at a distance. There’s also a ground-penetrating radar system that will be used to search for underground ice or salt water. 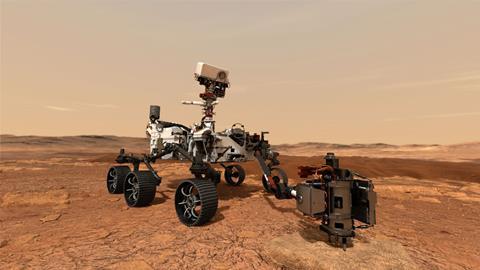 Meanwhile an ultraviolet Raman spectrometer dubbed Sherloc will search for organics and minerals that have been altered by watery environments. An x-ray spectrometer called Pixl will also reveal the elemental composition of surface materials.

‘One thing that really excites me is the ability to correlate different measurements from the different instruments and gain that much more information about a sample,’ says Luther Beegle, Sherloc’s principal investigator at Nasa. ‘Because SuperCam, Pixl and Sherloc have cameras that document the spectra they obtain we gain the ability to look at a sample with everything on the rover and that is a powerful tool for looking for biosignatures.’

Beyond looking for past life, Perseverance has a suite of cameras plus two microphones to record audio on Mars for the first time. ‘We will actually see and hear what happens in the “seven minutes of terror” during the landing,’ Farley says.

The rover will also be able to run experiments on producing oxygen from atmospheric carbon dioxide to investigate whether human-life support systems and fuel production is feasible on the planet.

‘The most exciting aspect of the Mars 2020 mission is the sampling and caching of samples for later pick up and transfer back to Earth,’ comments Jon Telling, who investigates martian geochemistry and biosignatures at Newcastle University, UK. ‘By bringing samples back to Earth, the full array of state-of-the-art analytical laboratory techniques can be brought to bear on the samples, and should provide our best chance yet of answering the key question: is or has there been life elsewhere in the solar system.’