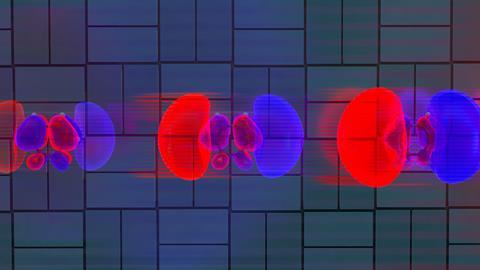 Scientists have been able to see, for the first time, how the electron cloud of a molecule swells in response to light. This is a prelude to the movement of atomic nuclei in the molecule that can lead to bond making and breaking. Examining the inner workings of chemistry in such detail opens up new possibilities for understanding and controlling chemical reactions.

The interaction between light and molecules plays a crucial role in processes such as photosynthesis and vision. When a molecule absorbs energy from light, the first step is a rearrangement of its electrons. This change in electron density sets up all the following steps and determines how the reaction proceeds, so characterising the initially excited electronic state is important. So far, this has only been done indirectly, using spectroscopic techniques combined with quantum mechanical calculations.

Now, the shift in the electron arrangement of 1,3-cyclohexadiene upon photoexcitation has been directly imaged using ultrafast x-ray scattering. ‘We have been able to capture this first fundamental step by recording the shape of the electron cloud surrounding the molecule immediately after it has absorbed a photon,’ explains Adam Kirrander of the University of Edinburgh, UK. ‘Once the electrons have changed their positions the forces acting on the nuclei change, leading to atomic motion and chemical processes such as bond breaking and making.’

1,3-cyclohexadiene serves as a model molecule for many important reactions and has been widely investigated, but previous scattering studies have mainly focused on the motions of the atomic nuclei, points out Peter Weber of Brown University, US. ‘By improving on the experimental setup and procedure, we were now able to observe the effect of the light on the electron densities,’ he says. ‘One important aspect was that we chose to excite the molecule to a state where the atomic motion is small, so that the signal is dominated by the effect on the electrons.’

The researchers used the Linac Coherent Light Source (LCLS) x-ray free electron laser (XFEL) at the Stanford Linear Accelerator Center (SLAC), which delivers ultrashort pulses – about 25 femtoseconds long – containing over a trillion x-ray photons per pulse. The team exposed a small volume of 1,3-cyclohexadiene gas to a short UV light pulse to excite the molecules. Then, a very short and intense x-ray pulse was fired at the sample, generating x-ray scattering images that were recorded. ‘To improve the signal level, the experiment is repeated many times,’ explains Weber. ‘Adjusting the time delay between the UV laser pulse and x-ray probe pulse allows us to time-sequence the signal.’

Stephen Leone at the University of California, Berkeley, US, who was not involved in the study, notes that most sources of x-rays are very weak and could not perform this type of experiment. ‘The authors have shown that they can excite a new electronic state in a molecule on a very short timescale and observe with x-ray diffraction scattering that the new orbital has been formed before the geometry of the molecule changes.’

Weber indicates that the approach could be extended to any molecular system. ‘One challenge may be when the electron density distributions change and the atoms move at the same time. In that case, we would probably still need to improve the signal level,’ he says. ‘The recent upgrades at LCLS-II in California and the new European XFEL in Hamburg hold promise that such studies could be done on a wide range of molecular systems in a not too distant future.’