X-ray diffraction, being celebrated in this International Year of Crystallography, has allowed us to peer inside matter to see where the atoms sit. But might it also let us see inside atoms themselves? That’s the promise in a theoretical study by Henri Suominen and Adam Kirrander of Edinburgh University, UK, who show that in principle the very intense, ultra-short x-ray pulses produced by free-electron laser (FEL) sources will be capable of revealing the motions of electrons in real time as they hop between different energy states in atoms and molecules. If experiments bear this out, the technique might be able to track the movements of electrons in biochemical processes or solar cells, and perhaps guide the design of better optical and electrochemical materials.

‘Imaging electronic motion in real time is extremely appealing and can lead to fundamental new discoveries,’ says Oriol Vendrell of the Center for Free Electron Science in Hamburg, a collaboration between the university and the DESY synchrotron. 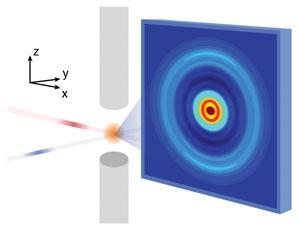 Kirrander and Suominen have calculated the diffraction patterns that would result from scattering x-rays from carefully prepared ‘wave packets’ of electrons in exotic atoms called Rydberg atoms. These are atoms in which the outermost electrons sit in very high-energy quantum states far above those of the ‘core’ electrons. Rydberg atoms can be made by using laser pulses to excite the outer electrons into large-radius orbits.

The idea is to use laser ‘pump’ pulses to sculpt a particular wave packet which changes over time, and to use very short x-ray pulses produced by free-electron lasers to produce a series of diffraction patterns from the electrons, from which their spatial distribution can be reconstructed. It’s the wave packet itself – a quantum superposition of individual electron wavefunctions – that acts as the diffraction grid.

The researchers look at Rydberg atoms because the rearrangements of the wave packets are relatively slow – on the order of several picoseconds (10-12s). Electrons in ordinary atoms and molecules tend to get rearranged by photochemical processes hundreds to thousands of times faster. What’s more, the outer electrons in Rydberg atoms have orbital radii hundreds of times larger than the core electrons, making it easier to spot changes in electron density caused by the Rydberg electron scattering from the much smaller, denser core. Kirrander and Suominen show that, for a particular wave packet in a Rydberg atom prepared from argon, clear differences in the diffraction pattern and thus electron distribution should be evident over roughly 6 picosecond intervals.

‘This experiment will have to be tried,’ says Vendrell. ‘The main difficulty will be collecting enough signal at the detector’ to resolve changes in the scattering pattern.

Will it be possible to see these processes in a system less exotic than Rydberg atoms, though? ‘The pulse duration at the free-electron lasers is sufficiently short to resolve much faster processes than Rydberg dynamics,’ says Kirrander. Vendrell agrees that resolving ‘the timescales of tens to hundred femtoseconds characteristic of atomic motions in chemical reactions are within current FEL capabilities’.

‘One could certainly imagine trying to follow an electron in a biochemical reaction or in a nanowire,’ says Kirrander. But he adds that ‘such experiments are quite far down the line’, and thinks that solar cells or organic light-emitting diodes, where the electron dynamics are slower, might be stronger candidates in the near term.

‘This research is headed towards a better theoretical and experimental understanding of electron dynamics and photochemical processes, making it possible to design materials with specific optical, electric, photochemical or mechano-optical properties,’ says Kirrander. He says that today such materials and molecules are often made and discovered by chance and then modified using chemical intuition, but thinks that ‘the process will grow to become much more targeted and based on detailed predictions – to rely on de novo design rather than serendipitous discovery’.