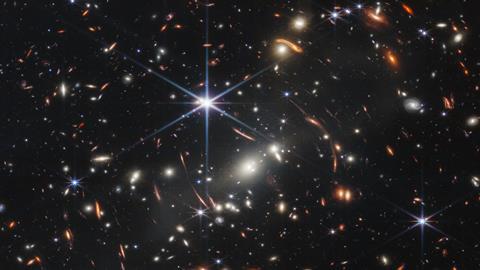 The world’s most powerful space science observatory has released its first full-colour images and data that have so far yielded the unambiguous signature of water on an exoplanet, and the chemical composition of a galaxy and the gas surrounding a black hole.

The James Webb Space Telescope (JWST), an international programme led by Nasa in partnership with the European Space Agency (Esa) and Canadian Space Agency, launched more than six months ago from Esa’s base in French Guiana promising to revolutionise the study of the chemistry and chemical evolution of the universe. It has now wrapped up its final tests and the first five sets of images and spectra were released on 12 July. Now the $10 billion (£8.4 billion) telescope is fully operational and should have enough fuel for about 20 years of exploration, Nasa said.

The telescope’s images and data have already shed light on the atmosphere of WASP-96 b – one of more than 5000 exoplanets identified in the Milky Way – 1150 light years from Earth. It has captured the distinct chemical signal for water, and also turned up evidence for clouds and haze, in the atmosphere surrounding the hot, puffy gas giant planet that orbits a distant sun-like star. 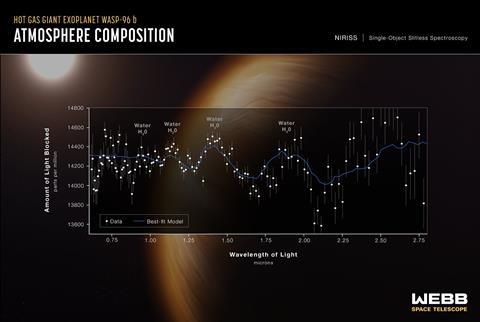 Water was detected on hot gas giant WASP-96 b using the Webb telescope’s near infrared spectrometer. The observatory should be able to detect other molecules such as methane and carbon dioxide – and their abundance – around distant exoplanets too

The JWST has revealed the presence of specific gas molecules based on tiny decreases in the brightness of certain wavelengths of light. Nasa describes this as the most detailed near-infrared transmission spectrum of an exoplanet’s atmosphere, noting that it demonstrates the new instrument’s unparalleled ability to analyse atmospheres far away.

The gamechanger is the ability to probe several molecules

‘We are expecting to learn really precise water abundance constraints – so not just detecting that there is water in the atmosphere but how much water is there and the implications for the overall composition,’ explained Knicole Colón, an astrophysict from Nasa’s Goddard Space Flight Center and JWST deputy project scientist for exoplanet science. ‘This was definitely the first look – these data have hardly been analysed … it is barely scratching the surface of what we are going to learn.’ She suggested that methane and carbon dioxide will likely be detected in WASP-96 b’s atmosphere too.

‘The gamechanger is the ability to probe several molecules,’ explained the University of Montreal’s René Doyon, who is principal investigator for the Canadian near-infrared imager and slitless spectrograph (NIRISS), which is one of four scientific instruments on board the JWST. ‘The Hubble Space Telescope was mostly focused on water because of its narrow view,’ he added.

Although Hubble has analysed numerous exoplanet atmospheres over the last two decades and captured the first clear detection of water in 2013, the JWST’s immediate and more detailed observation represents ‘a giant leap forward’ in efforts to characterise potentially habitable planets beyond Earth, Nasa said.

The Webb telescope’s NIRISS also covers a remarkably wide range of wavelengths, including visible red light and a portion of the spectrum that involves wavelengths longer than 1.6µm, which has not previously been accessible from other telescopes. This part of the spectrum is particularly sensitive to water and other key molecules like oxygen, methane and carbon dioxide, which were not immediately obvious in the WASP-96 b spectrum, but which should be detectable on other exoplanets.

‘The quality of data that JWST offers to the university space research community will lead to important scientific observations, better explore exoplanets and [the] farthest galaxies, and continue the search for evidence of biological activity across the universe,’ said the Universities Space Research Association (USRA), which represents more than 100 universities around the world. ‘For example, the first spectrum of exoplanets captured by JWST showing signatures of atmospheric water vapour will be a launching point for many, many exciting discoveries. And as the incredible data comes forward in the next six months, the universities will be able to conduct revolutionary science.’

In another image, the JWST has also uncovered the chemical composition of galaxies in and beyond the SMACS 0723 cluster 4.6 billion light years away, measuring oxygen, hydrogen and neon. To do this, the Webb telescope’s mid-infrared instrument was used to survey galaxies’ dust content – the engine of star formation. Blue galaxies have many stars but little dust, while green ones are rich in hydrocarbons and other chemicals. The image shows that SMACS 0723 is teeming with thousands of galaxies.

‘That tiny, fuzzy red dot is a galaxy as it was 13.1 billion years ago,’ tweeted Emma Chapman, an astrophysicist and Royal Society fellow based at Imperial College London, responding to the shot galaxies’ chemical composition. ‘It is now the farthest galaxy where we know what elements are present. #JSWT allows first stars scientists like me to understand the chemical evolution of the universe in exquisite detail. Incredible.’ 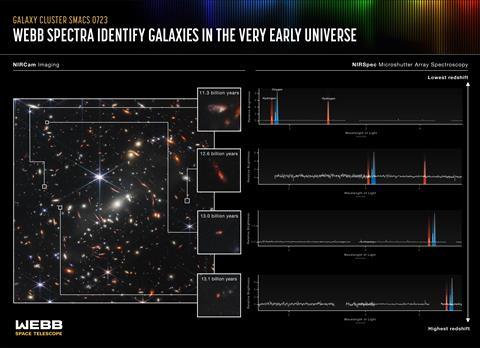 The JWST was able to reveal portions of the chemical composition of galaxies as far as 13.1 billion light years away

Another of the JWST’s new images reveals unprecedented details of the galaxy group Stephan’s Quintet, which includes five galaxies located in the northern constellation Pegasus. The image depicts how interacting galaxies trigger star formation in each other, and it shows outflows driven by a black hole in Stephan’s Quintet in never before seen detail.

A combination of Webb’s spectrographic and camera instruments were able to determine the composition of the gas near a supermassive black hole, 24 million times more massive than the sun. Webb also penetrated the dust surrounding the black hole to measure the bright emission from hot gas being ionised by powerful winds and radiation from the black hole. The ionised gases included iron, argon, neon, sulfur and oxygen. Further, the black hole turned out to be shrouded in silicate dust not unlike sand, but with far smaller grains. 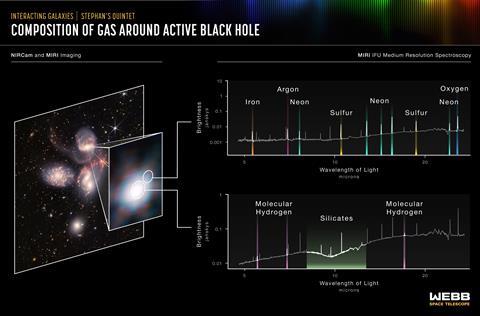 The elemental composition of the hot jet outflow (smaller highlighted ring) from a supermassive black was revealed by a combination of camera and spectrometry instruments. The black hole was also shown to be surrounded by (larger highlighted ring) a very fine sand

One of the remaining two image subjects released by JWST is the Carina Nebula, a nursery for young stars dubbed the ‘Cosmic Cliffs’ that is approximately 7500 light-years away. The other is the Southern Ring planetary nebula, about 2500 light-years from Earth, where the telescope captured an expanding cloud of gas surrounding a dying star.

In response to these new images, scientists all over the world, including many chemists, could not contain their enthusiasm. ‘I am excited about all the molecular clouds and all the cool chemistry we are going to discover,’ tweeted Partha Bera, a quantum chemist at Nasa.