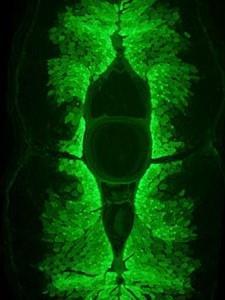 A section through an Unagi eel, showing the fluorescent protein in muscle cells.

A protein from Unagi eels is the latest addition to the fluorescent protein paintbox, and the first to come from a vertebrate.

The Unagi’s status as a culinary delicacy means you’re more likely to encounter these eels in a restaurant than a lab. But a group of researchers led by Atsushi Miyawaki at the RIKEN Brain Science Institute in Wako, Japan, were excited to discover the eels glow in the dark. They isolated the fluorescent protein, which they named UnaG, and found some surprising properties while investigating its structure. UnaG’s fluorescence is only triggered when it is bound to another chemical. This happens to be bilirubin, a breakdown product of the blood pigment haemoglobin that is commonly used in humans as a biomarker for liver function. High levels of bilirubin indicate poor liver function, and can eventually result in jaundice.

The team say UnaG could form the basis for a quick and easy test for liver health, as high levels of bilirubin in patient blood samples cause it to glow. The discovery could also prompt legislation to protect the Unagi eel, which is currently classed as endangered.