In the lush forests of Southeast Asia grow extraordinary botanical gems: mushrooms known as Mycena chlorophos that emit a spooky green light. Now a scientist in Japan believes that he has figured out part of the mechanism behind their mysterious glow. 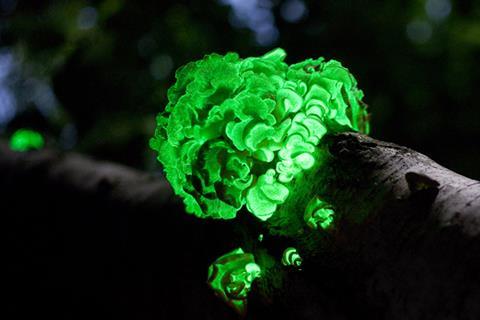 Although there are around 77 bioluminescent mushroom species, the mechanisms of their light emission has remained mysterious

The light-emitting qualities of this species of mushroom have intrigued researchers for years, so Katsunori Teranishi at Mie University in Tsu, Mie, Japan decided to look into their chemistry. He analysed the composition of the mushrooms’ gills, and found their only green fluorescent components to be riboflavin, riboflavin 5’-monophosphate and flavin adenine dinucleotide.

Under a microscope, Teranishi also observed that these same components were localised in the bioluminescent region of the mushrooms’ gills. He then extracted the components from the gills and measured their fluorescence spectra, comparing them with the bioluminescence spectra of the gills themselves. It turned out that they were the same, so Teranishi concluded that the three compounds were indeed possible light emitters in the mushrooms.

‘This result contributes to understanding the mechanisms underlying M. chlorophos bioluminescence,’ says Teranishi. But the exact mechanisms are still not completely clear, as light emitters are just one part of the glowing equation. ‘I have not yet isolated enzymes required for bioluminescence reaction,’ Teranishi notes. He’s now planning to do so in the hope of solving this fungal puzzle.

More than 5 million fungi species have been identified worldwide and only 77 are known to glow, but scientists don’t know much about the mechanisms of their light emission. ‘Fungal bioluminescence is mysterious,’ says Teranishi. Although it may appear that all glowing mushroom species emit light from the same components because they all glow green, he notes that this theory has not yet been proved scientifically.

‘I believe that this thinking is not correct,’ Teranishi says, noting for example that researchers have previously found that another glowing mushroom species, Omphalotus japonicus, appears to owe its emerald glow to another component – lampteroflavin.

Cassius Vinicius Stevani, a chemist at the University of São Paulo who was not involved in the new study, is sceptical of Teranishi’s findings. Previous research has suggested that a different mechanism, involving a compound called 3-hydroxyhispidin, is responsible for light emission in other glowing fungi from the same mycenoid lineage that M. chlorophos belongs to.

‘All bioluminescent mycenoid fungi likely have the same mechanism of light emission, and it is unlikely that this one mushroom species would have a different mechanism because mycenoid fungi emit light by the same pathway,’ Stevani says.