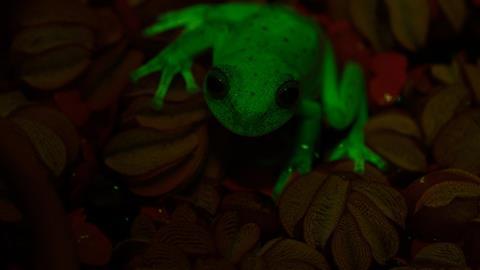 The first fluorescent frogs have been discovered in South America. The green fluorescence is due to a compound found in the lymph and skin glands of the polka-dot tree frog (Hypsiboas punctatus). At twilight, the phenomenon enhances the frogs’ brightness and may help them communicate with each other.

Fluorescence has previously been reported in fish, scorpions and birds, but never amongst the 7000 plus species of amphibians. The blue–green glow of the polka-dot tree frog was observed when they were under UV light and is linked to a new fluorescent compound, not previously known in nature. The compound absorbs light in the violet–ultraviolet region and emits blue–green light. Time-of-flight mass spectrometry showed that the main fluorescent compound was the molecule Hyloin-L1. NMR revealed an N-methyl-dihydroisoquinolinone core. 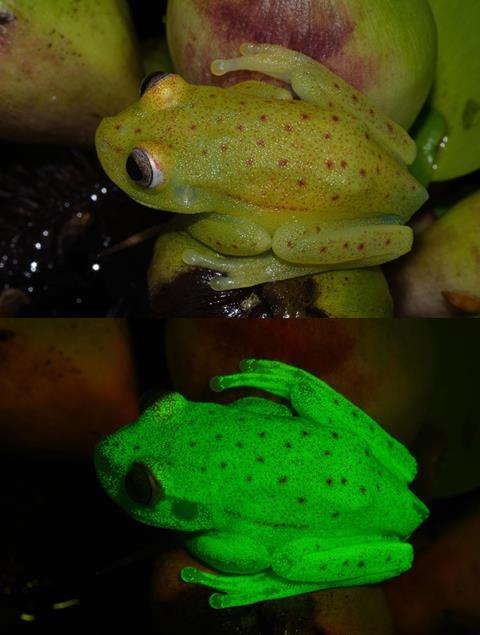 Before and after. The polka-dot tree frog in natural light (top) and under UV (bottom)

‘It is basically a benzamide with a methoxy group added on, which makes the absorption band fall on the edge of the visible spectrum,’ notes Andrew Beeby at Durham University, UK, who was not involved in the study. He adds that this ‘DayGlow frog’ adds to our growing awareness of bioluminescence. The isoquinolinone structure has never before been described in any animals, only in plants. The chromophore seems to be the cyclic benzamide.

‘This is very different from fluorophores found in other vertebrates, which are usually proteins or polyenic chains,’ says author Maria Gabriela Lagorio, a photochemist at the University of Buenos Aires, Argentina. ‘The chromophore itself is well known, but the class of the secondary compound is completely new,’ adds co-author Norberto Peporine Lopes, a natural product chemist at the University of São Paulo in Brazil. 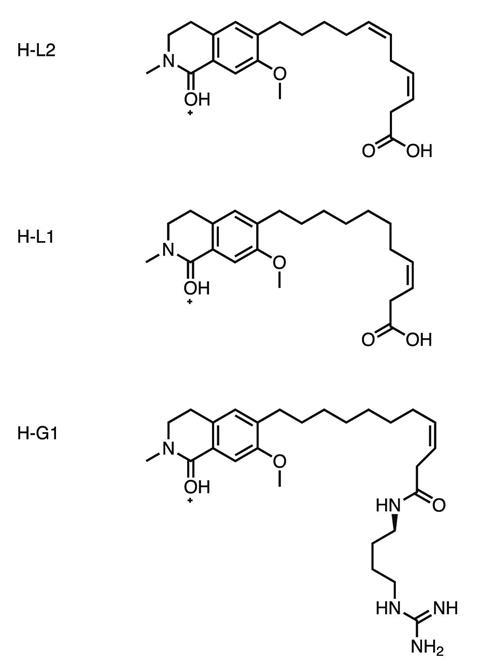 Hyloin L-1 (H-L1) is the molecule that is principally responsible for the polka-dot tree frogs’ fluorescence, although the other molecules pictured also contribute

Biologist Karen Carleton at the University of Maryland notes that like many colourful compounds, ‘it contains lots of carbon–carbon double bonds with lots of π electronics that can easily be excited at visible wavelengths. It is also similar to a compound like 11-cis retinal, which is the chromophore that our eye uses to absorb light.’

The discovery is a bolt out of the blue for most in the field. ‘We were not expecting this bio-fluorescence. It was an incredible surprise,’ says Lopes. He suspects the frog, which has translucent skin, uses the phenomenon to communicate. Lagorio agrees: ‘Amphibian species have photoreceptors in their eyes maximally attuned to blue and green vision, so we expect that these compounds enhance the brightness of these frogs under conditions of twilight.’ The team has now begun examining the polka-dot’s relatives. ‘We expect that this will be a more universal phenomenon with perhaps 100 or 200 species showing this property,’ says Lopes.

‘It would be interesting to investigate if [fluorescence] has a role in species recognition, or whether it facilitates the formation of couples,’ notes Bibiana Rojas, ecologist at the University of Jyväskylä, Finland. ‘Fluorescence would be potentially very useful in a noisy environment and in a habitat with dense foliage, as it would make individuals brighter.’