3-Hydroxyisonicotinealdehyde (HINA) has broken the record for being the smallest green-emitting dye.1 Researchers in France and Germany showed they could react the dye with a platinum complex and used it to quantitatively detect cysteine, a prominent disease biomarker. Alongside such practical applications, the team hopes the molecule’s complex photophysical behaviour will spark theoretical interest amongst electron dynamics researchers.

The biologically-disruptive effects of commonly used fluorescent labels has driven researchers to seek out ever smaller fluorophores. To complicate matters, many small dyes with high quantum yields suffer from fluorescence quenching in aqueous media, which renders them unusable in biological settings. The search for dyes that are both small and water-soluble has proven an enduring challenge. 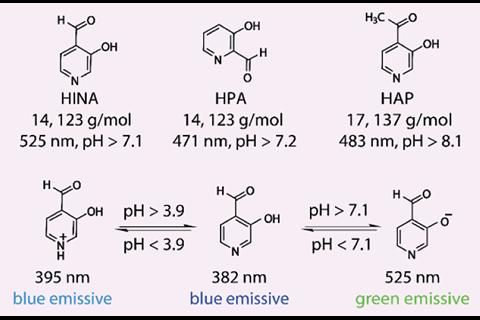 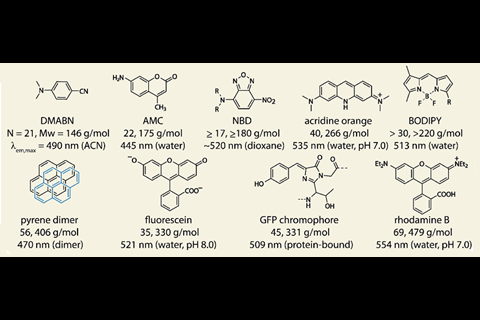 While the absorbance behaviour of HINA was first reported in 1959,2 the group claim the molecule’s unique fluorescence properties have until now been overlooked. Compared to the similar-sized, blue-emitting dyes azulene and naphthalene (both 18 atoms), the group found that HINA was strongly green emitting in water, a true outlier for its small size.

As well as its potential in cysteine detection, the group found that HINA could permeate biological membranes and localise in both cancerous and non-cancerous cell lines with low toxicity. The small size of HINA is not just of practical benefit – the molecule’s low number of atoms, electrons, and conformers, in addition to its unique photophysics, makes it a prime candidate for future computational study.