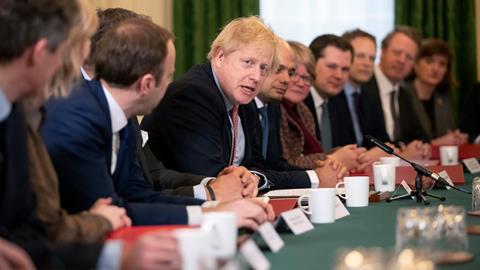 Future of UK science hangs in the balance in crucial year

As the dust settles on December’s election result, the government has been laying out some of its priorities for science over the course of the next parliament. It has already pledged to double science funding to £18 billion over the next five years and says it will cut bureaucracy for scientists applying for grants. The uplift – consistent with previous commitments to boost R&D to 2.4% of GDP by 2027 – together with a new emphasis on science has been welcomed across the community. But scientists want a well thought out, long term strategy to boost ‘blue skies’ or responsive research.

A new paper from the Policy Institute at Kings College London has the former science minister David Willetts arguing that ‘after a decade of flat cash the core budgets of the research councils are now inadequate and an increase in these is a high priority. The increase in spending when [UK Research and Innovation] was created all went on funding for the new challenges with nothing for core capability. We must not repeat this mistake.’

While it’s impossible to determine whether increasing the pot of challenge funds will affect core UKRI budgets, an analysis by the Campaign for Science and Engineering (Case) shows the balance of funding within UKRI has been changing.

The situation is compounded by the potential loss of European Research Council (ERC) grants if the UK does not associate to the next EU research programme – Horizon Europe. ‘If we don’t replace ERC funding with unrestricted blue skies funding it will have a catastrophic effect,’ asserts Lee Cronin, Regius professor of chemistry at Glasgow University. ‘There will be an unprecedented brain drain in UK science.’

There’s no breakdown of where the extra billions will be spent but the Department for Business, Energy and Industrial Strategy (BEIS) says the money will ‘allow the UK to invest in cutting-edge science and industries of the future where the UK can lead the world’. These include life sciences, clean energy, space, computing, robotics and AI. ‘The government will drive forward development of these technologies by investing in hubs around world-leading universities.’

Some £800 million of the new money is expected to go on a UK Advanced Research Projects Agency, inspired by the US agency set up in 1958 to ‘prevent technological surprise’ and provide scientists with the freedom to fail. Now focused on defence and known as Darpa, its work led to the development of the internet and GPS. The new agency – the brainchild of the prime minister’s chief adviser Dominic Cummings – is expected to sit outside the UKRI and offer 100% funding. BEIS says it will experiment with different funding approaches ‘giving researchers the freedom to pursue high-risk, high-reward projects – tackling some of the world’s greatest challenges’. It is talking to ‘a wide range of researchers and innovators to help scope and design the organisation’.

James Wilsdon, a governance of science researcher at the University of Sheffield, hasn’t seen the evidence to justify a new agency. ‘We’re being told it’s about risk taking: if it’s doing the really creative stuff, that’s what the research councils should be doing.’ He adds, ‘just 18 months after the creation of UKRI – I’m dubious at best that we need more structures. The biggest challenge UKRI was aiming to address was a challenge of interdisciplinarity – we’ve barely begun that task.’

Cronin argues that unlike the UK, Darpa can draw on a ‘massive number’ of well-funded national labs – a point also made by Willetts. ‘I have Darpa funding from the US,’ says Cronin. ‘Three projects in excess of $10 million (£7.6 million) that are only possible because I have [Engineering and Physical Sciences Research Council] and ERC money. And without it, my Darpa money would be ineffective because I’d have no flexibility to make mistakes and go up blind alleys.’

A UK Arpa is expected to be sited outside London. Wilsdon would support some effort at regional funding if it were done ‘in a serious way and at scale. The little amounts through the strength in places fund were not enough to make a difference.’ Nor was the scheme really about the expertise in those areas, suggests Elizabeth Gibson, reader in energy materials at Newcastle University. ‘If the government is serious about improving productivity in regions then there has to be more investment in science,’ and access to major facilities. ‘There are clusters of excellence up here that are a bit cut-off.’

Gibson worries that many of the headline grabbing strategic investments in areas such as plastics or batteries tackle symptoms rather than underlying problems, ‘whereas we’ve still got a lot to learn in fundamental catalysis and reactivity’.

In addition to more evidence-based policy making, Cummings also wants to see bureaucracy cut – something that was repeatedly mentioned in December’s Queen’s speech. UKRI is working on how this could be achieved. Both Cronin and Gibson back those efforts. ‘The admin burden is stopping me having time to think – and that time to think is needed to come up with new ideas,’ says Gibson. The administrative load is so time-consuming, Gibson says her research has to be done outside office hours.

But the elephant in room for UK science is whether or not government will negotiate access to the proposed €94 billion successor to Horizon 2020. BEIS says: ‘Where it is in the UK’s interests we will seek to participate in some specific EU programmes as a third country.’ Last week, science minister Chris Skidmore took to Twitter to address concerns that UK participation in the Erasmus+ student exchange scheme would end, after MPs rejected an amendment to the EU withdrawal bill that would have required the government to negotiate access to the scheme after Brexit. Skidmore said the government remained open to participation.

However, Mariya Gabriel, the EU’s new commissioner for research and innovation told Science Business that there could be ‘no cherry picking’ when it comes to a deal on research cooperation, diminishing hopes that the UK could press ahead on this aspect of a future relationship before the end of the transition period.

She was underlining the message from the European commission’s new president Ursula von der Leyen, delivered in a speech in London the day before. She said that while the EU would go as far as it could to negotiate a new partnership, ‘without an extension of the transition period beyond 2020, you cannot expect to agree on every single aspect of our new partnership. We will have to prioritise.’