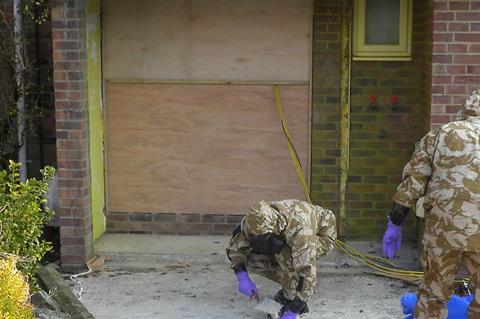 The clean-up operation at the front entrance to the Salisbury house of former Russian military intelligence officer Sergei Skripal, who was the target of an attack using a Novichok nerve agent.

Salisbury wasn’t a particularly well-known city internationally – except, apparently, by those wanting to visit medieval cathedrals with 123m spires or historically-interesting clocks. That all changed on 4 March 2018, when it became the site of the first ever use of a nerve agent on European soil. The small city was abruptly catapulted onto the world stage and the global media descended.

A former Russian double-agent Sergei Skripal and his daughter Yulia found slumped unconscious on a city centre bench, with no visible signs of injury, was the first indication something was amiss. Police officers visited his home as part of their investigations, and shortly afterwards one was also taken seriously ill. A few days later it was announced that analytical chemists at the Defence Science and Technology Laboratory (Dstl) at nearby Porton Down had found the culprit – a nerve agent. This was later revealed to be one of a group of organophosphate nerve agents known as Novichok. Developed in Russia in the 1970s and 80s, publicly-available information about these agents is scarce and the exact Novichok used in Salisbury has not been released to the public. 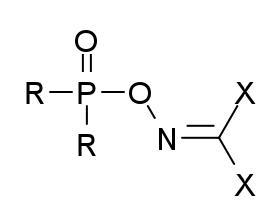 Poison identification marked the start of the UK government’s defence laboratory’s near-year-long involvement in this incident. Over that time its chemists analysed over 7000 environmental and biomedical samples. ‘This was an order of magnitude higher than the number of samples we had ever seen before,’ explained Dstl’s chief executive Gary Aitkenhead on 23 May 2019 during the 22nd International Chemical Weapons Demilitarisation Conference in London, UK.

Analytical testing was just one of many roles Dstl’s chemical weapons experts played in this episode. Technical expertise was another. ‘Dstl took on the role as scientific lead during the incidents and provided scientific advice to every level of the operation,’ said Aitkenhead. The knowhow of Dstl’s decontamination chemists, for example – with expertise in how chemical weapons spread and how best to clean them up – was heavily drawn upon throughout.

To stop something spreading, you first need to know where it is. A substance that can’t be seen poses obvious challenges.

‘In the situation we were faced with in Salisbury, the Novichok agent was spread primarily by direct pickup and transfer,’ Norman Govan, a senior decontamination chemist at Dstl, told Chemistry World during an interview at Porton Down on 3 July 2019. ‘The level of spread was related to the frequency and duration of touch with each transmission seeing less and less of the agent transferred – a bit like fingerprint ink,’ Govan explains. ‘Our sampling showed that very low levels of contamination had been spread to 12 sites. However, given the nature of the material a highly precautionary decontamination approach was adopted.’ 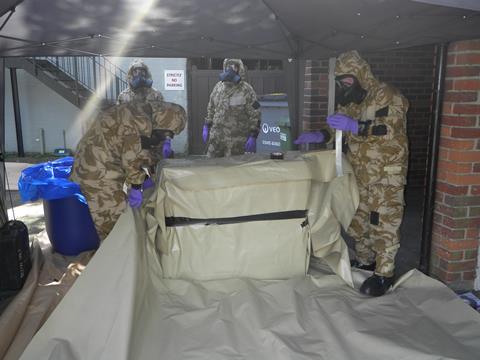 Furniture being wrapped up before removal for disposal. Decontamination work was carried out at 12 sites across the region

The movements of potentially contaminated individuals were first tracked using traditional policing tools, such as CCTV and eye witness accounts. ‘The potential of onward spread via contaminated items that they had contact with was also considered,’ says Govan.

In total, nine contaminated locations received specialist decontamination in Salisbury. A further three in Amesbury were added to the list after Charlie Rowley and Dawn Sturgess came into contact with the Novichok on 30 June 2018. Sturgess became the only fatality from the Novichok agent a week later.

Potentially contaminated vehicles were also identified, and many ultimately destroyed including eight belonging to the ambulance service and 16 to the police.

Novichok poisoning by the numbers

Sample collection during the clean-up, coined Operation Morlop, was carried out by military personnel. Testing every square millimetre of surfaces that might have been contaminated wasn’t logistically possible during such large operations. Instead, computer models were used to select location and size of mixtures of random and targeted sampling sites. ‘The software tool utilises statistical sampling theory to develop a statistically defensible sampling plan,’ Govan explains.

The tool needs to know the shape and size of the room, or other environment, being assessed and the location of every surface – from windows, to furniture, to phones. Building plans gave broad overviews. Military personnel then used a remote surveying method called Lidar to collect the detail. Lidar illuminates areas with pulsed laser light, detects reflected pulses and uses this data to produce 3D images.

It is also important to understand the transfer coefficients – the proportion of a compound that is transferred from a dirty surface to a clean one when they touch. These vary significantly between surfaces. Glass on glass, skin on wood and the sole of a boot on concrete all have different transfer coefficients, for example. Proportions also vary between contaminants

Once a surface was identified as contaminated there were two choices: clean-up or disposal. The decontamination chemists balanced time, personnel safety and cost of clean-up against the same metrics for disposal. 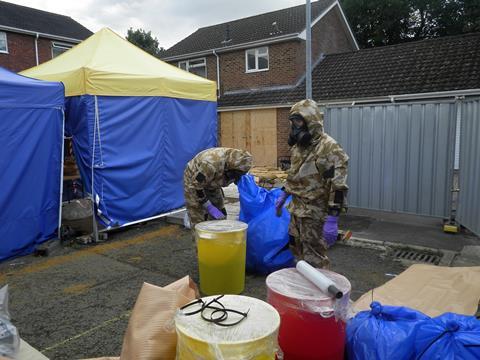 Sorting items for disposal that have been removed from a house

Disposal wasn’t the easy option. ‘Everything that was taken to disposal was double-wrapped in chemical agent resistant material or in specialised coatings,’ says Govan. Items were then taken to a high temperature incinerator or a hazardous waste landfill site near Bishop’s Cleeve in Gloucestershire.

Absorbent surfaces, such as plasterboard, wood, some plastics and concrete, are particularly time consuming to decontaminate. ‘When contamination enters a porous material, cleaning just removes materials from the surface and slightly below. Contamination trapped within the material can ultimately diffuse back to the surface,’ says Govan. ‘Given the level of effort to decontaminate and assure these materials as clean, it was generally easier to remove and dispose.’ Especially for the more heavily contaminated locations – such as the concrete surface below Sergei Skripal’s front door, where the Novichok agent was first deployed.

For surfaces needing clean-up, the decontamination chemists advised military personnel on what to use. ‘A wide range of formulations, surface application methods and coatings were used during the clean-up operation,’ Govan explains.

Active ingredients in cleaning formulations designed for organophosphorus compounds typically either oxidise or hydrolyse the molecules, rendering them harmless. ‘In this particular case, we’re talking about an organophosphate that will hydrolyse with relative ease,’ says Govan. Organophosphate hydrolysis can be carried out chemically, using sodium hydroxide for example, or biologically, using enzymes. 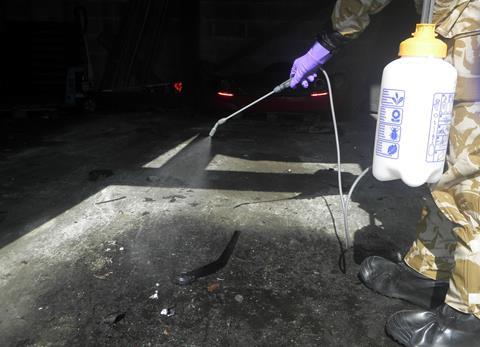 Chemical decontamination was selected for Operation Morlop. Enzymes work best in ‘less-aggressive decontamination formulations that can be used on sensitive equipment or complex surfaces, such as electronics’, explains Govan. ‘Most items of this type were sent for disposal.’

Testing in Dstl research labs found that no commercially-available chemical hydrolysis formulation was suitable for this clean-up, explains Govan. Instead, throughout the clean-up, the scientists were testing and then optimising formulations before preparing them in bulk for immediate use in the field. ‘We were formulating dynamically as we learnt what was contaminated and where decontaminants needed to be applied,’ he says. ‘It was a very unique situation.’

As well as identifying the right active ingredient, there were a number of other considerations for the team such as whether it was ‘in an appropriate medium to solubilise the contamination’ and ‘in contact with the surface long enough to take effect’, explains Govan. ‘Every time you encounter a different contaminant or surface type this balance of reactivity, solubility and contact time changes.’ He likens this to doing a ‘Rubik’s Cube puzzle’, where you think you’ve got one component right and then realise the formulation is inappropriate for another reason.

The decontamination chemists also advised military personnel on how to apply the formulations they provided. ‘With a lot of these decontaminants, it’s as much to do with the process as the product. Some of them can be applied and left in place for a given time, while some need a lot of physical scrubbing,’ says Govan.

Acid etching is an example of a surface application method used during Operation Morlop. This takes the top layers off surfaces such as concrete.

Coatings were used for both decontamination and during removal of some items, to prevent the spread of further contamination. During the dismantling work a coating – developed to clean up radioactive material – enabled dust containment. ‘When we get into the business of removing plaster from walls, we were applying latex coatings to the surfaces to prevent re-aerosolisation of contamination,’ says Govan. Drawing upon decontamination skills and resources, coupled with meticulous contamination control measures, a specialist contractor was called upon to inform and demonstrate these at the sites.

After each location was decontaminated, there was another round of swabbing and testing – and if necessary further decontamination – to ensure all the agent had been destroyed.

Each step of Operation Morlop was overseen by a specially-formed body of cross-government senior and chief scientific advisers, chaired by the Department for Environment, Food and Rural Affairs. ‘This group reviewed all plans and sampling results and no site was released without it providing assurance that it is safe to return to users,’ explains Govan.

Since the clean-up ended on 1 March 2019, the decontamination chemists have returned to their research. The development of colour-changing sprays that reveal the presence of nerve agents are an ongoing focus with the help of academic collaborators. A novel disclosure spray was tested in the field for the first time in Salisbury. ‘A disclosure spray that utilises dynamic buffering of cholinesterase enzymes was assessed as part of the operation,’ Govan says. But they found that ‘other compounds interfered with the colour disclosure mechanism’ giving false positives.

Another ongoing research focus is model development. ‘The software [used in the clean-up] is quite clunky’ and time consuming to use, explains Govan. Dstl has a longstanding collaboration with the academic groups working to develop improved mathematical models that can be used to determine the level of hazard reduction required to allow safe operation of ‘decontaminated’ military assets. These will also eventually help prevent the spread of contamination and predict the effectiveness of decontamination approaches. ‘The goal is to ensure that “next time” we can respond in an even more agile manner,’ says Govan.

For Dstl’s scientists, the Salisbury and Amesbury clean-up operation was both a professional and personal challenge. As their chief executive explained during his May 2019 conference speech: ‘Many of our staff live in the local areas that were affected by the incidents.’ Once we realised what had happened ‘there was a huge amount of enthusiasm’ to pull together and put things right, explains Govan. ‘There are a lot of unsung heroes here.’

In exchange for behind the scenes access to the Novichok decontamination process, Chemistry World agreed that Dstl and government partners could vet the article for any sensitive information that was not cleared for public release