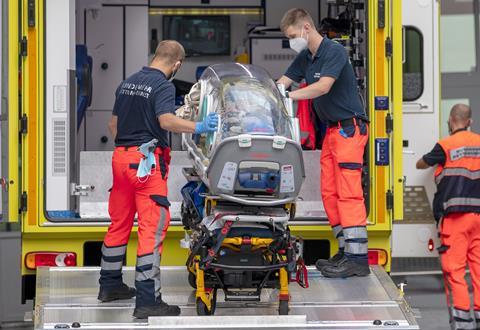 The German government has announced that toxicological testing has yielded ‘unequivocal evidence’ that Russian opposition leader Alexei Navalny was poisoned with a Novichok nerve agent.

‘It is shocking information about the attempted murder by poison of one of Russia’s leading opposition members,’ said German chancellor Angela Merkel in a 2 September news conference. ‘There are very serious questions now that only the Russian government can answer, and must answer,’ added Merkel.

Navalny, an outspoken critic of Russian President Vladimir Putin and his government, became ill on a flight back to Moscow from Siberia on 20 August. He was flown from Russia two days later for treatment at the Charité hospital in Berlin. The anti-corruption activist remains in a serious condition on a ventilator.

There are around 20 known Novichok chemicals, and they vary in toxicity. These compounds are classified as organophosphates and were developed in the Soviet Union in the 1970s and 1980s as part of a secret cold war chemical weapons programme, and are variants of conventional organophosphorus-based nerve agents. Novichok means ‘newcomer’ in Russian.

‘Given the history of use of these agents, the suspicion would be quite rightly be pointed in the direction of the Russians,’ says Robert Chilcott, a professor of toxicology at the University of Hertfordshire, UK. Other experts in this area agree. ‘Very few other countries have a track record of using nerve agents – Russia, North Korea and Syria – and in this case only Russia would be interested in going after Navalny,’ remarks Andrea Sella, a chemist at University College London.

There is also a sense that the Russian government is quite content leaving brazen forensic trails. ‘It is kind of amazing that they should do this because what it really shows is that they have a kind of impunity – they don’t actually care about the fact that people will draw that conclusion, and there aren’t very many alternatives,’ says Sella. ‘The Russian disinformation machine will be going nuts in the coming hours.’

Novichoks act in the same way as other nerve agents, blocking the passage of messages along nerves to muscles. They are inhibitors of the enzyme acetylcholinesterase that regulates the reuptake of the neurotransmitter acetylcholine after a message has been passed from one neuron to another.

‘Novichoks work by regulating acetylcholine – a neurotransmitter that contracts smooth muscles – and when the enzyme is blocked … the muscles that control your movement, breathing, heart, etc, are all blocked and their function fails,’ explains Alastair Hay, professor emeritus of environmental toxicology at the University of Leeds, UK. He notes that these agents also have a direct effect on the brain that leads to unconsciousness.

Navalny is currently being treated with atropine, according to Charité hospital. The hospital has said that his symptoms are the result of ‘cholinesterase inhibition following a confirmed poisoning event’ and that he continues to improve due to ‘gradual recovery of cholinesterase activity’.

The identitiy of the Novichok compound used on Navalny has not been released. However, efforts are underway to find out whether it is the same type used against former Russian spy Sergei Skripal and his daughter in Salisbury more than two years ago. 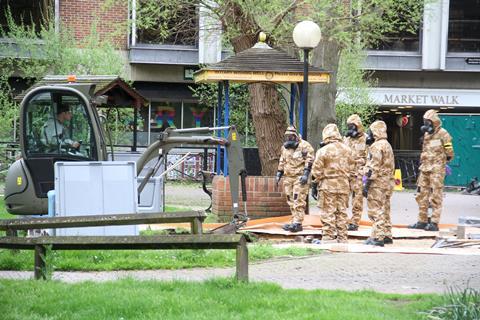 The Skripals survived the attack, but not everyone was so fortunate. In June 2018, two British citizens with no connection to the Skripals – Charlie Rowley and Dawn Sturgess – became gravely ill after finding and using a perfume bottle that had apparently held the Novichok agent used to attack the Skripals. Sturgess later died from the effects of the poison, but Rowley recovered.

Following the use of a Novichok agent in Salisbury two years ago a gargantuan clean-up effort was launched that involved the testing of thousands of samples and the disposal of tonnes of contaminated material.

Experts note that the German military lab currently conducting tests on Navalny will compare its findings with the UK’s Porton Down defence research laboratory that worked on the Skripals’ case. ‘If the specific compound used is identified as exactly the same one used on Skripal and his daughter, that will just only further cement things, but if it’s a different one that doesn’t really weaken the case for Russia having done it very much,’ says Sella.

Such knowledge is important because it will help doctors to treat Navalny. Novichok poisoning has been successfully treated with not only atropine – which counteracts the physiological effects of the nerve agent – but also with oxime drugs, which bind the nerve agent and remove it from acetylcholinesterase’s active site. However, oximes are specific for a certain chemical structure.

‘We don’t know how oximes would work for all Novichoks – in the Skripals’ case one was tried and it worked,’ says Hay. ‘So, if it turns out that the same Novichok was used on Navalny, then they have a very specific treatment that they can give him.’

Experts agree that a huge amount has been learnt about these agents by the Porton Down lab and the labs of the Organisation for the Prohibition of Chemical Weapons in their investigations of the Salisbury poisonings and the two that followed on later.

‘This is a fantastic puzzle,’ says Sella. ‘At this point, there will be pretty robust protocols, but you change a methyl group here or there and that can complicate things – however, with good GCMS you have a chance.’

Nevertheless, Sella warns: ‘Because the Russian system is familiar with these chemical agents for 30 or 40 years, there may be chemical strategies to throw dust in the eyes of the analytical chemists.’