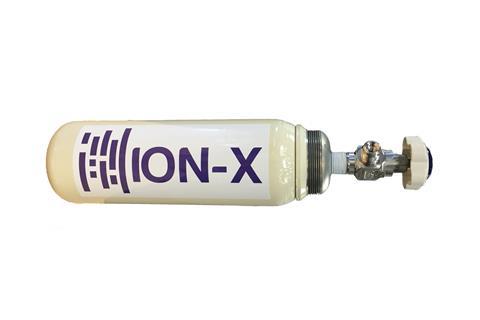 US energy technology start-up NuMat has launched one of the first products to make use of metal–organic frameworks (MOF). The firm’s ION-X gas storage cylinders use MOFs to store hazardous gases used in the electronics industry much more safely than conventional pressurised cylinders.

ION-X is based on a proprietary set of MOF adsorbents developed by NuMat specifically for gases such as arsine, phosphine and boron trifluoride used in the electronics industry. The new cylinders are already being shipped to customers around the world, who are testing them in electronics manufacturing.

If we don’t start seeing some major transitions into impacts in applications, I think the MOF bubble could burst

Applications for MOFs have centred around gas storage, which is a long-term challenge with significant market complexities. Some of the gases involved in semiconductor manufacturing, for instance, can be highly toxic. Therefore, customers are willing ‘to pay a premium’ for a safer delivery mechanism, Benjamin Hernandez, NuMat’s co-founder and chief executive, tells Chemistry World. By storing gases at sub-atmospheric pressures, ION-X reduces the risk of these dangerous gases leaking out, Hernandez explains.

NuMat does not ultimately aspire to be a gas company, however. It is setting up a separate facility in Asia, and once the cylinders are loaded with MOFs in the US, NuMat will ship them there for filling.

Hernandez says NuMat already has a partnership in place with one of the top gas companies in Asia, and plans to publicly launch that collaboration in November.

Last month, MOF Technologies announced that it had created the first commercial MOF, which prolongs the life of fruit and vegetables in storage. However, Hernandez says that with ION-X, ‘NuMat is the first company to fully launch a product themselves with MOF materials, not requiring the engineering or channel capabilities of someone else.’

Rather than selling MOF-based materials, Hernandez describes NuMat’s business model as delivering ‘fully baked’ systems and products. This is an important distinction, because he suggests a company that simply licenses and then sells a MOF-based technology cannot be considered to have truly engaged in commercialisation.

Omar Farha, NuMat’s other co-founder and chief science officer, agrees. ‘We are not a material provider company,’ he states. ‘NuMat is providing the customers with a system level solution from A to Z.’ He emphasises that ION-X is a US made product that will be exported around the world.

Seth Cohen, a professor of chemistry and biochemistry at the University of California, San Diego, who saw Farha present on ION-X at an international MOF conference in California in September, praises NuMat’s focus on a high value speciality application for MOFs. He says ION-X varies from the many proposed applications of MOFs that are very large industrial scale processes, like gas separation. ‘You want to find a market that is manageable, where the MOFs add real value, as opposed to trying to change the world with your start-up company in a single stroke – that is just so much harder to do,’ Cohen states. ‘Hopefully it will be successful, because it will validate MOFs as a market-ready technology,’ he adds.

Intensive MOF research has been going on for at least 15 years, so the field is no longer in its infancy and MOF chemistry is ubiquitous, Cohen points out. ‘It is sort of overwhelming how much MOFs have taken over a large swathe of inorganic chemistry and other fields, such as materials chemistry,’ he states.

Mircea Dinca, an associate professor at the Massachusetts Institute of Technology’s chemistry department, is also enthusiastic about ION-X. He calls the technology ‘an exciting development for the entire field of MOFs’, and a ‘smart product’ that addresses a high value market for gas storage, but at a much smaller volume than some of the other promising applications like natural gas, carbon dioxide or hydrogen.

MOFs have offered a lot of promising potential in a wide range of applications for well over a decade, and ION-X shows that such potential can be realised, Dinca states. He expects to see a lot more applications for MOFs in future.

Cohen says it’s important that MOFs are seen to make it to market. This helps to validate the frenzied interest the materials have generated in the research community. ‘If we don’t start seeing some major transitions into impacts in applications, I think the bubble could burst … and interest would start waning,’ he cautions. Cohen notes that this flurry of activity has surrounded other materials, like buckyballs and graphene, for example. ‘At some point, people expect to see an application, you know, to justify all the research,’ he adds. ‘Starting to see that is very valuable.’