Getting closer to secrets on the seabed

Researchers from Spain have engineered a laser spectrometer to analyse solids underwater that they hope to eventually develop for deep sea research.1 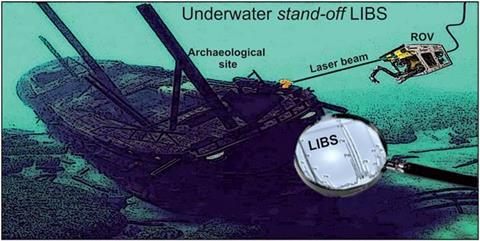 Stand-off laser induced breakdown spectroscopy (ST-LIBS) is a technique to identify the elemental composition of solids at a distance, enabling safe analysis of explosive, radioactive or toxic compounds.2 While this technique is well-developed and widely used in air – Javier Laserna and coworkers at the University of Malaga built a ST-LIBS system able to differentiate between common explosives and contaminants such as hand cream or motor oil3 – there is no current technology to apply it underwater.

LIBS works by superheating a solid sample to create plasma, then analysing the light emitted. In water the sudden temperature change creates a gas bubble, which expands and creates a shock-wave that disrupts detection. Many researchers have been working to counteract the cavitation effect of the bubble. Recently, Laserna built a prototype spectrometer connected by a 50m optical fibre cable to a handheld probe that was used to analyse a shipwreck in Andalucía.4 This technique avoided cavitation by keeping the probe in contact with the artefact and using a jet of compressed air to remove water between the probe and the sample, but it was limited by the length of the optical fibre. For deep sea research, Laserna had to take a different approach and ‘send the complete instrument to the sea bottom’. In these new experiments, the laser is transmitted through the water and the plasma emissions are collected through a telescope using a stand-off LIBS setup. Laserna examined underwater targets in a tank at distances up to 80cm, allowing a proof-of-concept for transporting a spectrometer to the location and analysing the site through a window.

Spectroscopy expert Jorge Pisonero, from the University of Oviedo, Spain, says this study ‘is of great interest for future underwater chemical characterisation of archaeological materials, although it might require further investigations to consider the influence of other important parameters, for example, influence of pressure and presence of particles’. Blair Thornton, an expert in deep sea research from the University of Tokyo’s Institute of Industrial Science Underwater Technology Research Centre in Japan, agrees: ‘It is known that the double pulse technique described in this work is strongly affected by external pressure, and so it remains to be seen whether this approach can be used under the high pressures of the deep ocean.’

Laserna is now building a chamber capable of producing pressures equivalent to a depth of 4000m, and hopes to examine the combined effect of pressure and temperature on the LIBS response of submerged solids and create a viable technique for real-time analysis of the seabed.