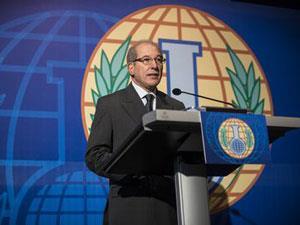 Chemists and others around the world are congratulating staff members of the Organisation for the Prohibition of Chemical Weapons (OPCW), which has been awarded the 2013 Nobel peace prize. The OPCW, established in 1997 to enforce the Chemical Weapons Convention and currently overseeing the destruction of Syria’s chemical arsenal, was awarded the prize on 11 October ‘for its extensive efforts to eliminate chemical weapons’.

‘I am thrilled that OPCW has won this award,’ says Alastair Hay, an environmental toxicologist at the University of Leeds, UK, who has helped to investigate the alleged use of chemical weapons. ‘The award is for the painstaking, below-the-media-radar work OPCW has done over many years to rid the world of chemical weapons.’ He adds that the work of the OPCW as part of the Chemical Weapons Convention, which now has 189 members who have declared they will never manufacture or use chemical weapons or help others to do the same, ‘is a huge and extremely creditable achievement for peace’.

Congratulations also came from Robert Parker, chief executive officer of the Royal Society of Chemistry, who notes that chemists are working globally with the OPCW. ‘We’re proud that many chemical scientists around the world are contributing to their important work of treating, preventing and destroying the horrific legacy of chemical weapons,’ Parker says.

Thorbjørn Jagland, the head of the Nobel peace prize committee, said that in addition to honouring the OPCW, the 2013 award also serves as a reminder to group members, such as the US and Russia, to eliminate their remaining chemical stockpiles.

Presently, seven nations have not signed the Chemical Weapons Convention – Angola, Egypt, North Korea, South Sudan and Syria – while Israel and Burma have both signed the convention but have not ratified it. Syria, where a sarin gas attack killed more than 1400 people near Damascus in August, is expected to officially become a member soon.

OPCW director general Ahmet Üzümcü says that winning the Nobel peace prize is a ‘great honour’ for for all OPCW staff members. ‘We are a small organisation which for over 16 years, and away from the glare of international publicity, has shouldered an onerous but noble task – to act as the guardian of the global ban on chemical weapons that took effect in 1997,’ he says. ‘The recognition that the peace prize brings will spur us to untiring effort, even stronger commitment and greater dedication.’