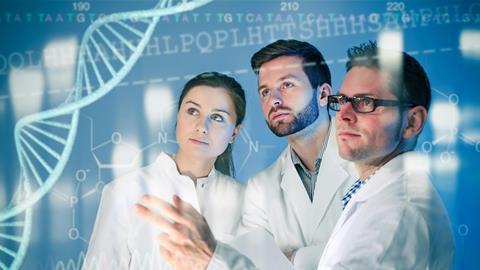 International scientific collaboration more than doubled worldwide between 1990 and 2015, according to new research led by Caroline Wagner, an Ohio State University science and technology policy professor. Her work, presented at the annual meeting of the American Association for the Advancement of Science (AAAS) in Boston, revealed that the number of multiple author scientific papers with collaborators from more than one country rocketed from 10% to 25% during those 15 years.

Wagner found that biochemistry is the third most common area of these multi-nation collaborations, behind the fields of physics and astronomy, and medicine. In addition, materials science and chemistry, were among the top 10 fields in terms of articles published that result from such cross-border research.

Wagner analysed the growth in international collaboration in the fields of astrophysics, mathematical logic, polymer science, seismology, soil science and virology. She and colleagues determined that all six specialties added between 18 and 60 new nations to the list of collaborating partners between 1990 and 2013.

In the early 1990s, international research collaboration was dominated by a few scientifically-advanced countries, and only around 20 nations were involved. But since then, Wagner says 58 more countries have joined such global partnerships. ‘Where it used to be that if you looked at all co-authored papers, about 10% of them were international collaborations in 1990, now it is closer to 30%,’ she remarks.

To determine how much nations benefit from their scientific work with other countries, Wagner went a step further and examined the impact factor of all the research articles that each country’s scientists published with international collaborators in 2013. When she compared the combined impact factor of each country to how much money the same country spent on scientific research, unsurprisingly the US had the highest overall spending with proportional returns. However, it turned out that five smaller nations – Switzerland, the Netherlands, Denmark, Finland and the UK – surpass the US when it comes to getting the most bang for their buck.

‘They are small players when you compare them to China, the US and the European Union as a whole, but when you look at them in terms of what they are getting for impact compared to spending, they are way outperforming everybody else in most fields,’ Wagner tells Chemistry World.

In contrast, she found that China is significantly underperforming. ‘China is lagging in terms of quality, but in quantity they have come way up,’ Wagner states. Over the last 30 years, she says, the country has grown exponentially when it comes to output of scientific articles and global research partnerships. She notes China has recently passed the UK as the US’s top science partner.

Meanwhile, Wagner’s work also shows that two countries formerly considered key global scientific players – Japan and Russia – are slipping. ‘Japan was one of the top scientific countries, and Russia used to put tremendous amounts of money in and get a lot of return for their investment, but they have dropped so much that they are not even in the top 40 producers in terms of citation impact,’ Wagner explains.

In the last 20 years, she says, both countries have seen ‘a very big drop – they are spending much less, and as they spend less, they produce less’. The quality of the research coming out of those two countries is declining faster than the quantity as well, she notes.

Wagner suggests that Japan is suffering in part because of the hierarchical structure of its universities. ‘That kind of a structure is really antithetical to doing good science,’ she says. ‘A lot of times, great scientific ideas come from young minds, and you have the old professor at the top and he or she – mostly he – controls what your juniors do, what they publish, who they are allowed to work with and talk to – it is going to stifle science.’ Wagner points out that Japan is among the least likely to participate in international collaborations, when most of the top research is now taking place at the international level.

The scientific decline of Russia is put down to a geopolitical shift. ‘With the break-up of the Soviet Union, a number of the funded projects even in basic science went away,’ Wagner recalls. ‘They shifted their research very much towards military research, and a lot of scientists left the Soviet Union.’

Wagner says her findings raise concerns about President Trump’s controversial executive order on immigration, which temporarily barred the entry or return of individuals from seven Muslim-majority countries and is currently on hold following legal challenges.

‘The biggest red flag is: where do scientific conferences go,’ Wagner says. ‘If people are going to have trouble getting visas to come to the US, well the conferences are going to go somewhere else – it’s safer and easier.’ She warns that conferences are the lifeblood of science because that’s where people meet each other and the latest findings are discussed.

‘If you start moving these conferences out of the US, a lot of our graduate students won’t be able to attend because it is expensive for them to travel internationally, Wagner states. ‘The people who need to stay at the forefront of science will begin to lose access – that to me is a short-term and a long-term concern for us.’