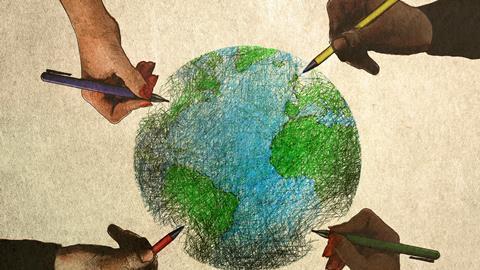 We’re all in this together

Is a golden age of scientific collaboration coming to an end? It certainly seems that way as all around the world doors are closing to partnerships between scientists. It’s not the scientists themselves that are responsible for this narrowing of scientific horizons, however, but nation states and supranational groups.

These opportunities for cross-border collaborations are closing for many reasons. High up on the list are economic nationalism, populism and geopolitical competition, along with fears over espionage and the urge to maintain a lead in certain scientific fields by shutting out ‘unfriendly’ competing nations.

Currently, UK researchers find their opportunities to collaborate with EU colleagues curtailed as they are shut out of the Horizon Europe programme over a trade dispute. Switzerland is in a similar situation to the UK and will need to find its own way to square the circle to improve relations with the EU.

Looking across the Atlantic a new era of ‘great power’ competition is emerging between the US and China. The US is using its R&D muscle to attempt to counter China’s rise in certain fields such as microchips and artificial intelligence. Partnerships between American and Chinese scientists are under suspicion too. Much of the western world is beginning to close its doors to collaboration with Chinese scientists as fears over espionage and malign influence surface.

Countries further afield such as India, Japan and Australia have placed restrictions on collaborations with China. Meanwhile, cooperation between Russian scientists and the west has fallen to its lowest level for decades over Russia’s war on Ukraine.

It appears that these security concerns are already starting to have an impact. One analysis found that collaboration between US and Chinese researchers had tailed off or even started declining in the last two years.

Ironically, this deterioration in scientific collaboration comes at a time when it is most needed. The problems we face as a species are multi-faceted and they have no respect for borders: climate change, pollution and pandemics to name a few. While countries will always restrict collaboration on research deemed to be ‘sensitive’, scientific cooperation more widely needs to be kept open. This benefits not only science but also diplomacy, by maintaining friendly relations, keeping lines of communication open and treating each other as humans and fellow scientists, rather than as representatives of a country. Only together can we face the problems that are common to us all.