The surface a sheet of graphene sits on determines its reactivity. US chemists have now explained why 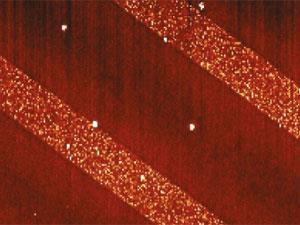 In chemical reactions, the reactants determine the level of reactivity. Not for graphene though – the one-atom-thick sheets of carbon can react vigorously or barely at all to the same chemicals, depending on the substrate they’re sitting on. US chemists have explored the electron ‘puddling’ phenomenon behind this strange behaviour.

A material as strong, lightweight and electronically exotic as graphene should have a million and one uses. Indeed, graphene would be even more useful if it could be chemically modified to suit different applications. But graphene chemistry is in its infancy and some bizarre properties make modifying it less than straightforward.

Focusing on graphene’s reaction with aryl diazonium salts, Michael Strano’s team from the Massachusetts Institute of Technology in Cambridge tried to work out why the material that graphene sits on influences its reactivity. Graphene resting on the common substrate silicon dioxide (SiO2) reacts rapidly. But SiO2 is used for p-doping – to draw electrons from the material – suggesting that, if anything, it should reduce graphene’s reaction rate in an electron transfer reaction. So why doesn’t it?

Using Raman spectroscopy to study charge fluctuations across graphene sheets, the team realised that electrons in the graphene layer were clustering around charged impurities in the underlying SiO2. Strano says this electron puddling is the driving force behind electron transfer reactions involving graphene. ‘Puddles play a big role in the chemistry,’ he says. ‘The reactant will react with the puddles – it doesn’t care at all about the average electron potential.’ By contrast, graphene resting on the smooth, pure surface of hexagonal boron nitride was relatively unreactive.

Cinzia Casiraghi, a graphene chemist at the University of Manchester, UK, is surprised that the reactivity of any material can be so dramatically altered by a change of substrate. ‘I’m not aware of any other material that shows this behaviour,’ she says, adding that it explains why boron nitride is a better substrate than silicon for graphene electronics – because it makes graphene more chemically stable.

According to Strano, the key to getting graphene to react is engineering its substrate, a concept that might be counterintuitive to chemists. ‘The tools of the chemist are the reactants, so a chemist would think intuitively, “I’m going find and design reactants and that’s how I’m going to be successful at chemically functionalising graphene.” However, our work shows you have to start with the substrate.’

There’s a more immediately practical application too. Strano’s team demonstrate a way of modifying graphene based on micropatterning of the underlying substrate, which transfers to the graphene in the form of a reactivity pattern that can be used to bind molecules in the same design. The technique could be used for creating sensors and microarrays based on proteins and other fragile molecules that are destroyed by conventional lithography.