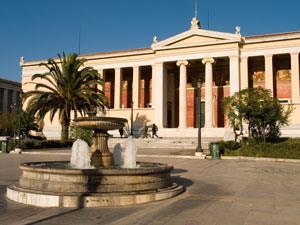 The mood of many teachers and researchers at Greek universities has plumbed new depths of despair in the wake of layoffs of administrative staff members that have triggered strikes and closures at several universities.

Before the recent layoffs, universities were already understaffed, underfunded and grappling with salary cuts, according to Yannis Zabetakis, assistant professor of food chemistry at the University of Athens. ‘This downward spiral is going on and on and on,’ says Zabetakis, who earned his doctorate at the University of Leeds, UK, where he also lectured for three years. ‘The morale of colleagues is shattered.’

Greece has been put under pressure by the EU, the International Monetary Fund and the European Central Bank to cut government spending. The Greek government has pledged by the end of the year to cut 4000 public sector positions. An additional 25,000 public sector workers, including university administrators, have lost their jobs but were placed into a strategic reserve in a so-called ‘mobility scheme’. Each worker is guaranteed a reduced salary until the end of the year while they seek other government jobs. If they are unable to find new jobs, they are officially discharged.

‘Greece needs education and strong universities to face the fiscal crisis and educate and train the young people,’ Zabetakis says. ‘But in fact we are doing the opposite. We are committing suicide in a massive scale experiment.’ Constantina Nasopoulou, a postdoc in the chemistry department at the University of Athens, says that the administrative staff lay-offs will severely disrupt everyday office functions in various university departments, which will have a negative impact on teaching and research. Most university teachers and researchers feel the Greek government should do more to protect the universities from the demands of the international lenders, she says, adding: ‘There is huge disappointment and discomfort about the way the Greek government is handling this.’

The University of Athens, which has about 65,700 students, lost 498 administrative staff members to layoffs, or 37% of the total, leaving only 839 non-teaching staff positions untouched.

Zabetakis disputed claims by some that Greek universities are overstaffed and can still function properly after the layoffs. He has posted statistics on his personal website comparing student-to-staff ratios of the University of Athens with UK university data provided by the Higher Education Statistics Agency. Zabetakis says that while the UK had 12.68 students in 2011–12 for each non-teaching staff member, after the layoffs the University of Athens has 78.29 students for each non-teaching staff member.

Asked what he thinks will happen if the university layoffs are not reversed, Zabetakis says: ‘I do not think that there is any future. The students will be forced not to study or the wealthy ones to study abroad.’