History of King Richard III written in his teeth 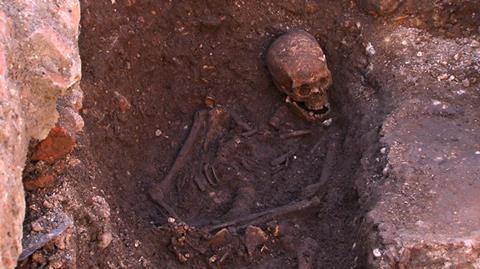 The chemistry of King Richard III’s bones and teeth has shed light on how his social status, diet and where he lived changed during his life. The study suggests that – as one might expect – he feasted lavishly on luxury foods and wine after he became king during the last two years of his life, before being killed at the age of 32 at the Battle of Bosworth in 1485.

The mortal remains thought to be those of Richard III were found in September 2012 under a Leicester car park – a landmark discovery that supported historical accounts of Richard III’s death and final resting place, as well as confirming he suffered from scoliosis, curvature of the spine. Now, chemical analyses of tooth and bone samples have added further insight into the king’s life and corroborated historical records.

‘The discovery of known individuals in archaeology is extremely rare. As well as wanting to find out as much about Richard III’s lifestyle as we could, it was also a unique opportunity to test isotope techniques by crosschecking historical records with our data,’ says Angela Lamb, who conducted the work with colleagues at the British Geological Survey and the University of Leicester, UK.

The team used well established archaeological techniques to retrieve the isotope signatures of several elements present in tooth, rib and femur samples taken from Richard III’s remains. These include strontium and oxygen from the tooth enamel, and carbon, nitrogen and oxygen from the bone. Since these elements are incorporated into the body from food and drink, and can vary slightly in different locations, these disparities can provide information about lifestyle, location and diet. Dietary levels of these elements and their isotopes can vary with climate patterns, the range of different foods and drinks consumed and geology. 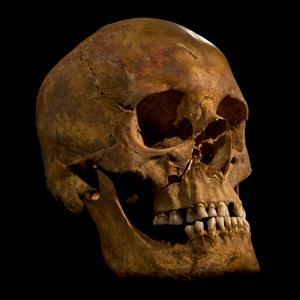 ‘Normally, when we analyse individuals we sample rib bone to examine diet and we sample tooth enamel for migration and locality information,’ Lamb explains. ‘In the case of Richard III, we wanted to analyse several different locations on the skeleton so we could piece together a life history.’

Sequential analysis of bioapatite – phosphate minerals – and collagen from a second premolar tooth with its root intact enabled the team to reconstruct Richard’s childhood and early adolescence. This was possible because oxygen and strontium isotopes are fixed in enamel biogenic phosphate at the time of tooth formation, and once fixed will not change during the person’s lifetime.

‘Teeth form early in life and so the results from the tooth samples gave us information about his childhood,’ explains Jane Evans, a co-author of the paper. ‘We could show that at around the age of seven he was no longer living in eastern England, where he was born, but must have moved further west where the rocks are older (strontium tells us this) and where it rained more than in eastern England (oxygen tells us this). This confirms historical evidence that he spent some time in Ludlow at this stage of his life.’

Unlike teeth, bone tissue constantly repairs itself. Leg bones are large and dense and carry information about the 10 to 15 years in which they regenerate, while smaller rib bones regenerate over a two to three year period. By analysing Richard’s femur, the team showed that Richard had, in the 10 to 15 years preceding his death, eaten a rich aristocratic diet typical of high status individuals of that time. The oxygen isotope signature revealed he was once more predominantly living in eastern England.

Egrets? I’ve had a few

Comparing the femur results with those of the rib showed that in the last two years of Richard’s life, when he was king, his diet became even richer. The team suggest that at the end of his life his diet was dominated by luxury foods that were typical of banqueting feasts at that time, such as fresh fish and wild birds, likely to include egrets, peacocks and swans.

However, the oxygen isotope signature in Richard’s rib differed to the femur, which would typically suggest his source of water changed, and thus that he moved location. But historical sources contradict this, with records showing that he stayed put in eastern England. So the team speculates he drunk more foreign wine during his final years that may have changed the oxygen isotope ratio in the rib sample.

‘The analysis of the stable isotope signatures of ancient organic remains provides archaeologists with unique insights into the diet and place of residence of individuals,’ says Andrew Chamberlain, a bioarchaeology expert at the University of Manchester, UK. ‘This study proves that Richard spent some time living in the west of England during his childhood, and interestingly that during the last few years of his life his diet changed substantially with increasing consumption of rich foods and one quarter of his fluid intake being imported wine, rather than locally-derived beverages.’

‘To our knowledge, this is the first example where the intake of wine has been suggested as having an impact on the oxygen isotope composition of an individual,’ says Lamb. ‘Thus we’d like to follow this up with more work and we also hope this paves the way for more detailed multi-isotope and multi-tissue reconstructions in the future.’