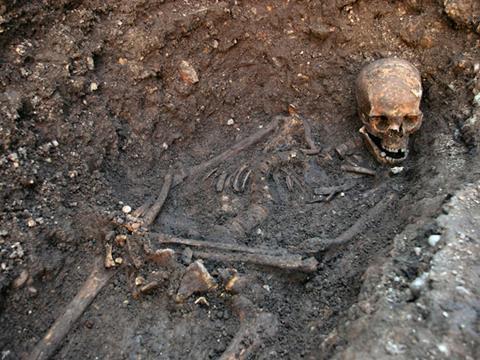 The mortal remains of England’s warrior king Richard III have been found, bringing to a close a mystery that has puzzled scholars for centuries. Analytical tests on a skeleton found under a Leicester car park have confirmed the last resting place of the final king in the Plantagenet line.

The announcement comes after months of feverish speculation. In September 2012, the University of Leicester announced that its detective work combing ancient texts had led its team to conclude that the King was buried at Greyfriars Monastery in Leicester. The monastery was no longer standing, but with the use of ancient records the team guessed its former location under a council car park. Excavation on site uncovered two skeletons: a man’s and a woman’s. The man had died a violent death, tallying with Richard’s death at the Battle of Bosworth in 1485. He had also suffered from scoliosis, curvature of the spine, which would have given him a stoop and led to one shoulder being significantly higher than the other. This also matches contemporary accounts of Richard III as the hunchback monarch, often thought to have been a slur invented by the victorious Tudors.

But while these pieces of evidence are intriguing, they could be merely a coincidence. To confirm beyond any shadow of a doubt that the skeleton they had uncovered was that of Richard III, the researchers conducted further tests on the body.

Radiocarbon dating revealed that the body was from the right era and that the man most likely died between 1455 and 1540. Examination of his bones showed that he died in his late twenties or early thirties; Richard III died at the age of 32. In depth analysis of the wounds the man suffered using CT scans confirm that he died in battle and that his body was also mutilated after death with humiliating wounds. The team also investigated whether DNA from living descendants of the king matched the skeleton’s.

Turi King, a geneticist who applies sequencing technologies to archaeological finds at the University of Leicester, led the team that investigated the skeleton’s DNA. She tells Chemistry World that great care was needed when extracting DNA from the skeleton. ‘We made sure the excavation was carried out in clean conditions – the main thing you’re worried about is modern DNA contamination,’ she says. A tooth was extracted from the skeleton, cleaned extremely carefully and sterilised with UV light before being ground up into a powder. Adding the powder to a buffer allowed the DNA to leach out so it could be extracted for analysis.

King’s team concentrated on mitochondrial DNA, which is exclusively passed down on the mother’s side. They sequenced the mitochondrial DNA from the skeleton and compared it with that of Michael Ibsen, a known descendant of the Plantagenet family on the maternal side, and a second person, who wished to remain anonymous, also related to Richard III.

They found that the skeleton’s relatively rare mitochondrial DNA sequence – found in only 1-2% of the UK population – was shared by both the Plantagenet descendants. But the DNA evidence shouldn’t be seen in isolation, says King. Richard Buckley, lead archaeologist in the search for the king’s grave, agrees: ‘It is the academic conclusion of the University of Leicester that, beyond reasonable doubt, the individual exhumed at Greyfriars in September 2012 is indeed Richard III, the last Plantagenet king.’

King says that she is now focusing on reconstructing Richard III’s Y chromosome to check this against male descendants from the Plantagenet line. However, she says it is likely to be a slow, painstaking task as the DNA is highly degraded.