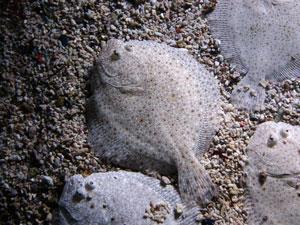 An antifreeze protein called Maxi helps prevent winter flounder from freezing up in the chilly waters of the North Atlantic. But a new study reveals that Maxi has a surprising structure, given its job. It turns out to be chock full of ice.

Peter Davies and colleagues at Queen’s University, Canada, have deduced the crystal structure of Maxi, and found that it has at its core more than 400 water molecules linked into an ice-like network. This makes it a very unusual molecule, not just because proteins with a compact, globular folded state generally have a water-repelling or hydrophobic interior that is almost entirely dry, but also because the huge amount of trapped water in Maxi is so highly organised by the surrounding protein scaffold.

‘We do not know of any precedents for internal waters on this scale,’ says Davies. Gerhard Hummer of the Max Planck Institute for Biophysics in Germany agrees. ‘This is one of most amazing protein structures I have seen,’ he says. ‘At first I found it hard to imagine that a structure with such limited direct interactions [between the peptide chains] would be stable.’

Life in the freezer

Antifreeze proteins restrain the formation of harmful ice crystals in fish living in near-freezing water. Many of them bind to the surface of ice crystals to arrest their growth. Understanding the molecular mechanisms would not only improve our knowledge of how life survives freezing conditions, but could have applications in cryopreservation. To discover Maxi’s solution, Davies and colleagues carried out x-ray crystallography on the protein at Brookhaven National Laboratory in the US.

Maxi has a rod-like shape 145Å long, made up of two a-helical coils folded in half like hairpins and sitting side by side to produce a bundle of four helices. In the central part of the bundle there are two slot-like channels intersecting at right angles between the helices, each just wide enough to accommodate a single layer of water molecules. The internal lining of the channels is composed mostly of hydrophobic amino acids, especially alanine.

The researchers found that this inner region is filled with water molecules hydrogen-bonded into a network of mostly five-membered rings. In ordinary ice water molecules form six-membered rings; the pentagonal network is characteristic instead of crystals called clathrates, in which water freezes around small solute molecules.

In Maxi the clathrate network bends around inward-pointing side-groups on the protein helices. Davies and colleagues think that the interior water is the residue of solvent trapped as the protein folds – water which is usually expelled entirely from proteins in organisms in warmer climes.

‘Harold Scheraga predicted 50 years ago that water molecules trapped between non-polar residues would form clathrate pentagonal rings,’ says biophysicist Jeremy Smith of Oak Ridge National Laboratory, US. ‘Pentagonal water structuring around hydrophobic protein surfaces has been observed previously, but I’ve not seen such an extensive array as this one.’

The water network extends out from between the four a-helical segments, where it can merge with hydrogen-bonded network of ice crystals, allowing the protein to attach to them and halt their growth. In other words, whereas many antifreeze proteins have surface groups that organise a layer of water molecules so that they can bind to the ice surface, here the binding seems likely to be mediated instead by the clathrate leaking out between the coils.

‘The trapped water sheets would thus provide molecular Velcro for ice binding,’ Hummer explains. But while he considers that explanation ‘conceivable’, he says it raises questions. ‘For instance, why does such a protein not nucleate the formation of ice? And why does the protein not get incorporated into growing ice, since ice-interacting sheets protrude from all sides?’

Questions also remain about Maxi’s structure in vivo. ‘I’m worried about the fact that it’s all done in a crystal,’ says Smith. ‘Might the crystal contacts have a structuring effect on the water? We need some proof that the ordered internal solvent is still present in aqueous solution.’

Could other proteins have a similar ‘ice glue’? ‘If one buys the functional hypothesis, one would think that other proteins should exploit such structures for generic binding to polar surfaces,’ says Hummer. But it’s possible that some of Maxi’s peculiarity comes from its specialised function, says Davies. ‘These are proteins that fold and work at zero or even sub-zero temperatures,’ he says. Proteins like this tend to rely more on hydrogen and disulfide bonding to hold the chains together, and less on hydrophobic packing in the cores. ‘The conditions that exist in Maxi to keep water in the interior on this scale are rather special,’ he adds.