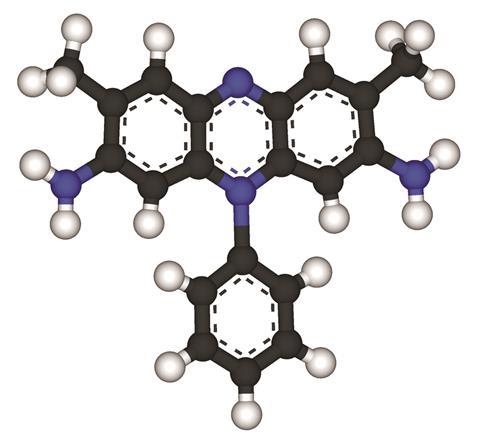 The small molecule safranin, usually used to stain cell nuclei red, has been found to be an outstanding inhibitor of ice growth. Safranin is between 10 and 100 times smaller than classic antifreeze proteins used by fish and other organisms, but still shows comparable anti-freeze activity.

Organisms living in polar climates have evolved complex proteins that irreversibly stick to ice, inhibiting crystal growth. These proteins have a characteristic folded structure containing very similar motifs to those found in ice. A team of researchers led by Bart Kahr at New York University in the US theorised that some organic dyes could mimic these proteins. This was because some dye molecules have been seen self-assembling into supramolecular aggregates that look similar to the three-dimensional structure of antifreeze proteins. 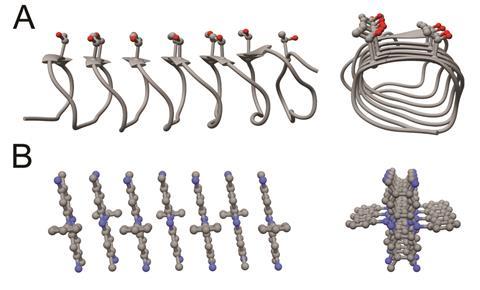 The structure of a mealworm antifreeze protein (top) is similar to that of a stack of seven safranin molecules (bottom) with features that enable them to bind to forming ice crystals, halting further growth

Chemists tested the effects of 27 different organic dyes on ice growth. Only one, safranin, impeded the formation of ice crystals. Concentrations exceeding 4mM completely halted ice crystal formation. In contrast with antifreeze proteins, the inhibitory properties of safranin are reversible. When the dye is rinsed with water, ice crystals can start growing again.

The discovery of new small and inexpensive antifreeze molecules could lead to important applications in medicine, such as in the storage and transportation of blood samples and tissues, and the food industry.