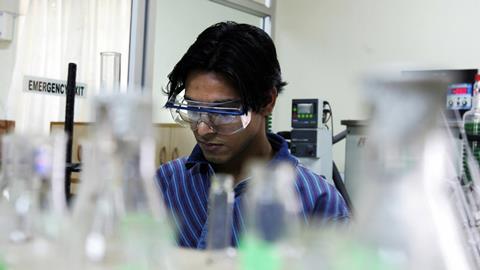 India’s restrictions on imports in a bid to boost domestic manufacture has hit its research groups in several public-funded institutes that import most of their advanced scientific instruments and chemicals. Some projects ‘have gone into a state of hibernation’ due to delays in purchasing imported instruments, says Harinath Chakrapani, an organic chemist at the Indian Institute of Science Education and Research (IISER), Pune. The problem is compounded by disruptions in supplies due to the Covid-19 pandemic.

In June 2020, India’s Department for Promotion of Industry and Internal Trade revised its public procurement policy to give preference to local suppliers. While non-local suppliers can tender, the lowest price offer will be selected. Only goods costing less than half a million Indian rupees (£4850) are exempt.

India relies entirely on imports for advanced instruments such as nuclear magnetic resonance machines and mass spectrometry instruments, and has few trained technicians to install or repair them. The country also imports chemicals of high-grade purity, for example, those needed in spectroscopy, as local suppliers often do not make the mark, says Biswajit Guchchait, a chemist at Shiv Nadar University (SNU). ‘The pace of the research has slowed down a bit because some necessary chemicals and/or instruments are arriving late,’ he adds.

In an open letter to Prime Minister Narendra Modi at the end of April 2021, which focused on access to Covid data, scientists write that India’s self-reliance policy ‘has made importing of scientific equipment and reagents an extremely tedious and time-consuming process’. ‘This has reduced our ability to scale up testing by developing new testing platforms and has impaired our ability to sequence viral genomes for surveillance rapidly and accurately,’ states the letter, which has been signed by more than 900 people.

Moreover, there is ambiguity in the policy wording that means each institution interprets it differently. While approvals for imports for Covid-19 research are fast-tracked, other projects need to pass through a lengthy centralised procedure despite the fact that they need to be approved by the funder. Many institutions are funded by the Ministry of Science and Technology, but hundreds of others such as IISERs, the Indian Institutes of Technology and all universities are overseen by the Ministry of Education.

Part of the problem is that the market remains small for the speciality chemicals and instruments needed in research in India, and high costs of manufacturing. ‘While the Indian government should facilitate and encourage Indian companies to produce equipment and reagents for research, until that happens, imports should be allowed,’ says Ashoka University biologist L S Shashidhara, who was one of the earliest signatory to the open letter. Private-funded universities such as SNU and Ashoka are not affected by the policy – for now – but Shashidhara previously worked in public-funded institutes is concerned over policy’s impact. ‘If we stop doing research, we would be pushed back and there wouldn’t be any market even if Indian companies want to sell their products.’

‘If Indian scientists have to compete with their international peers, access to the global marketplace has to be similar,’ Chakrapani points out. ‘A scientist in the West rarely has to face delays of three to six months for procuring instruments. This time period can easily be the difference between a high-impact research advance and not-so-impactful incremental advance.’

‘It is time that our policy makers understand this and ease restrictions to improve efficiency without compromising on regulatory oversight,’ says Chakrapani.