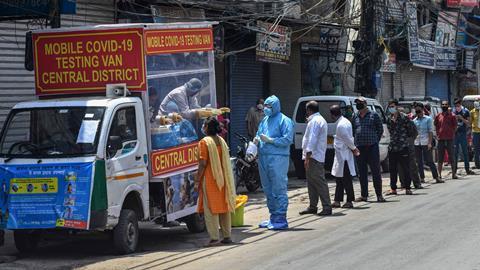 India’s plan to ramp up testing for the novel coronavirus has been hampered by its dependence on imports of both test kits and the regents needed to make the kits. This has slowed down large-scale domestic production of test kits, researchers and industry representatives say.

India’s Covid-19 cases tally on 13 May stands at 74,281 infections and 2415 deaths, since the country recorded its first Covid-19 case on 30 January. On the face of it, the number of cases look small in a country of 1.3 billion, when compared to the US or some European countries. But juxtaposed against this is its relatively low rates of testing – 1.3 per 1000 people as opposed to 22 per 1000 in the UK, 28 in the US and 13 in South Korea. Public health experts fear that community transmission has begun and is growing in India, and if an outbreak occurs in rural areas, the weak public health infrastructure there, where there is little testing capacity, will be overwhelmed.

In tandem with a strict lockdown imposed since 24 March, India had initially planned a two-pronged testing approach – mass screening using rapid antibody tests, and a follow-up with a highly sensitive and specific reverse transcriptase polymerase chain reaction (RT-PCR) test. As several large publicly-funded institutes and domestic companies scrambled to make both types of test kits, rapid antibody test kits imported from China were found to be faulty, and their use halted by the Indian Council of Medical Research (ICMR). This left India more or less reliant on RT-PCR tests, with India aiming for 100,000 tests a day.

The pandemic has brought home India’s dependence on chemical imports for test kits. These include simple enzymes such as glucose oxidase and horse radish peroxidase, and immunoassays to detect antibody–antigen reactions.

In the case of Covid-19 PCR test kits, some of the key enzymes and other biological materials, and even some of the plasticware such as vials, are imported, usually from China, says Siva Kumar, spokesperson for the Association of Indian Medical Device Industry (AiMED)’s diagnostic product group. ‘There will be an 80% or more dependency on imports for chemicals and other components for these kits.’

‘India has the capability in terms of technical competency to develop or manufacture such raw materials, but there has been no focus and people who have attempted to do so, have not met the quality standards,’ he adds.

‘None of the companies in India are making all the reagents even for one [kind of] test kit, if we specifically talk about nucleic acid-based diagnostic kits,’ says Daman Saluja, director of medical biotechnology at the Dr. B R Ambedkar Centre for Biomedical Research at the University of Delhi. She says one company may make the PCR primers needed to demarcate the segment of the genetic material to be copied and initiate the reaction, but does not prepare the probe needed to detect the specific genetic material. ‘Many enzymes are not available with Indian vendors and have to be imported,’ adds Saluja. ‘Molecular biology grade chemicals need to be purchased from multinational companies.’

The novel coronavirus may continue to circulate for years to come, which means India needs sustained delivery of PCR testing kits, points out Seergazhi Gopalan Srivatsan, a chemistry professor at the Indian Institute of Science Education and Research, Pune, who is preparing genetic probes against coronavirus genes which are key components of PCR test kits, and expects to test them in-house soon. In addition to these problems, India is reliant on foreign firms for enzymes, primers and kits to isolate viral genetic material, he says.

‘Since several countries are relying on companies for these reagents, probes and enzymes, they are in very high demand, and the lead time for delivery is longer,’ adds Srivatsan.

India’s dependence on imported reagents to develop diagnostic kits is the most critical constraint in its plans for domestic testing, agrees Suman Chakraborty, dean of sponsored and industrial consultancy at the Indian Institute of Technology (IIT) Kharagpur. Chakraborty says that there are two major consequences of India’s dependence on imported chemicals. It takes considerable time and effort to bring these chemicals from overseas locations to the lab in India, and this adds substantially to the cost. ‘Indigenous development of these chemicals is one way out,’ says Chakraborty.

Another option for India is to innovate and search for alternatives to RT-PCR, which is not only expensive but needs to be run by trained technicians. IIT, Kharagpur, for example, is developing devices that require tiny volumes of these reagents. The institute is using microfluidics technology – systems that can manipulate the flow of small quantities of fluids using channels typically tens to hundreds of micrometres wide – to develop low-cost diagnostic devices for use in extremely resource poor settings.

Similarly, the Sree Chitra Tirunal Institute for Medical Sciences and Technology (SCTIMST), Trivandrum, is looking at cheaper alternatives to RT-PCR tests. The institute has already been developing a more sensitive version of loop mediated isothermal amplification, a technique in which the gene sequence can be amplified at the same temperature – unlike PCR which requires a series of alternating temperature cycles – as a cheaper alternative for TB diagnosis. ‘SCTIMST was ready to roll it out in national programme when Covid-19 hit India,’ says Anoop Thekkuveettil, senior scientist of the division of molecular medicine at SCTIMST. The institute has now modified it for Covid-19 diagnosis, and it is currently being validated by the ICMR.