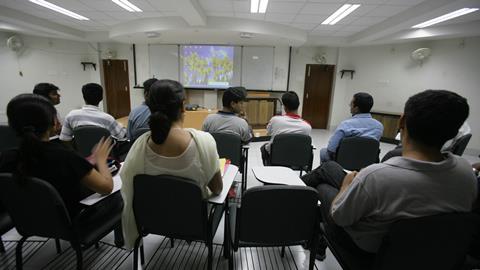 India’s top chemists are expecting the country’s new education policy (NEP) to usher in a new era of interdisciplinary teaching and research across universities, most of which have stuck to a decades-old format of rigid separation of disciplines.

The NEP, launched at the end of July, ‘envisions a complete overhaul and re-energising of the higher education system’. Besides a shift to a multidisciplinary undergraduate education, it aims to revamp curricula, and both faculty and institutional autonomy.

The current strict separation of disciplines means that chemistry is usually taught with physics, mathematics or biology, and chemistry students cannot opt for social sciences or fine arts in most universities, barring a few relatively new universities. The NEP notes that this strict division has led to ‘too much early specialisation and streaming of students into narrow areas of study’.

Higher education in the sciences has been ‘adversely impacted by the strict segregation of students’ into physics–chemistry–mathematics and physics–chemistry–biology streams,’ says Nagamani Sukumar, professor of chemistry at Shiv Nadar University (SNU), a private university near Delhi that is among the few, newer universities to buck the trend. ‘This is untenable in the 21st century,’ says Sukumar who also teaches the art and science of colour at SNU, which draws students from the sciences, arts and engineering disciplines. Undergraduate chemistry students at SNU are required to take courses in calculus, statistics, physics, cell and molecular biology, as well as computer programming.

Chemistry researchers have also welcomed the NEP’s emphasis on experimental work in a shift away from the traditional rote learning that has been used by most Indian universities. ‘Chemistry is largely an experimental science and much of learning happens through doing,’ points out Harinath Chakrapani, a professor at the Indian Institute of Science Education and Research, Pune. Such a shift could improve the quality of learning at the undergraduate and postgraduate level, he says, and the chemistry curriculum needs to incorporate concepts that are learned through discovery rather than by memory. ‘Chemistry education in India has been a victim of the latter approach and teaching is largely memory-based.’ Critical thinking and innovation are other focus areas in the policy document that are ‘welcome additions to chemistry research’, says Chakrapani.

Only 30% of institutes’ time and energy should be spent on lecturing, and the rest should be hands-on practical training at the undergraduate and postgraduate levels, adds Arunachalam Ramanan, a professor at the Indian Institute of Technology, Delhi.

One of the key aspects of the NEP is setting up the National Research Foundation (NRF) to fund outstanding peer reviewed research. The NRF also aims to seed research in universities and colleges where capability is currently limited to address ‘a lack of research at most universities and colleges, and transparent and competitive peer-reviewed research funding across disciplines’. The NEP states that the NRF ‘would bring a quantum jump in funding and support for research’ to promote an interrelated and coordinated research culture in all higher education institutions.

The NRF, along with incentive-based career progression, ‘are all steps in the right direction’, says Chakrapani.

The NEP ‘is laudable in its intentions, but short on specifics of interpretation and the resources required’, observes Sukumar. These include the amount of funding the national and state governments are prepared to commit. ‘Without such sustained commitment, are we running the risk of breaking an already dysfunctional system?’ he asks.

Ramanan says the funding aspect is unclear too, as the budget for education would require a ‘manifold increase’ to implement the NEP. ‘There is no indication of the costs involved in implementing this policy and the annual estimated outage’ and no guarantee that successive governments will ‘nurture this baby as the current parent [will]’, he says.

The new policy also does not address the paradox in which candidates who do not pass the mandatory examination to do research can, however, teach in universities. ‘This signals the wrong system of priorities and devalues the teaching profession,’ says Sukumar.

The policy will take at least 20 years to come to fruition, points out Ramanan, and it should be implemented in a phased manner rather than introducing all the changes at once. While scientists are hopeful, ‘it will, however, take considerable time to become visible’, he adds.

‘The new NEP is an intrepid attempt to deviate from the beaten path,’ Ramanan says. ‘It is an attempt to create a new structure without demolishing the existing one but [by] making alterations.’