Surgical tool analyses tissues for signs of cancer as it cuts and cauterises, and could help doctors get all the tumour in one go

Surgery is a messy business, and for surgeons trying to remove tumours it’s hard to tell how much is too much. All of the cancer needs to be excised, but surgeons want to remove as little healthy tissue as possible. That led Zoltan Takats at Imperial College London, UK, to wonder if mass spectrometry could help. 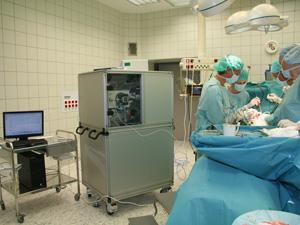 ‘What happens quite often,’ says Takats, ‘is we chemists develop something which we think is great for medicine or food chemistry, or forensics or so on, but it turns out people don’t really need our help.’ But in this case, he explains, it was the surgeons that got excited.

Normally, when surgeons are cutting away cancerous tissue they use electrosurgical instruments, which cut into the skin using heat and release a smelly smoke that is full of ions. When used in operating theatres today, these knives are fitted with a tube to suck the smoke away and prevent surgeons from breathing it in.

Takats’ mass spec essentially fits into the smoke collection system, analyses the smoke and compares its components with a database to tell if the tissue is healthy or cancerous. However, this required a new type of mass spectrometry that can analyse smoke particles, which Takats had to develop, called REIMS, or rapid evaporative ionisation mass spectrometry.

Takats’ knife, which he calls the intelligent knife, or iKnife, uses the cauterising equipment used in surgery as the ion source for mass spectrometry. ‘Surgeons have been using an ion source for years,’ explains Takats, ‘but no one realised.’

Recent clinical trials, comparing Takats’ mass spec enabled knife in surgery to histological tests, show the knife works well during surgery, as well as in the lab. ‘This could be a game changer,’ Takats says.

While most of us might hope to avoid the operating theatre, those working in mass spectrometry have been trying to get into surgery for years, according to Nick Winograd of Penn State University in the US. ‘The real force here is that that a major obstacle has been shot down and I think this shows what might be possible. Those of us in the field are really delighted with this kind of development.’

‘I don’t often go into an operating theatre and not wish I had this technology,’ says James Kinross, a bowel surgeon at Imperial who has worked with the mass spec team. There are 10.5 million operations in the UK each year, he says, and while the operating environment has changed drastically to reduce patient trauma, there is little biological data available to help surgeons make the right choice when cutting out cancers.

What data the surgeons do get is from histological tests on biopsies of the tissue that they remove, which can take up to half an hour. That’s slow for the surgeons and patient, who is still lying on the operating table, but fast for the histology lab.

The result of quick, rough tests on biopsies is that up to 10% of patients can be left with residual tumours that need further surgery. The beauty of this technique, he says, is that it augments and supports existing techniques and technologies.

The molecules the mass spec is most interested in are lipids. Over several years Takats’ team have built up a huge library of tissue types, both healthy and cancerous. Surveying these has shown that tumours have a different lipid profile to healthy tissues and that this difference can be used to distinguish between the two during surgery. Changes in the lipid make-up of cell walls follows histology quite well, Takats says.

‘Lipids are intrinsically good markers,’ agrees Graham Cooks of Purdue University, US. ‘Lipids are abundant, they are easily measured by ambient [mass spec], and they reflect the current state of a biosystem.’

Cooks says there is a friendly rivalry between himself and Takats, who was once his postdoc, but nevertheless describes Takats’ work as a major achievement. The next step, he suggests, is combining tissue identification and diagnosis, adding that ‘surgery might well be the crown jewels of the future, but food safety, forensics, point-of-care therapeutic drug diagnosis, etc will all be significant areas of activity.’

There are still hurdles to be overcome before this new knife finds its way into the operating theatre, but with this clinical test Takats and his team have validated their technique. Next comes the search for an industrial partner to help develop the product into a smaller, more streamlined piece of equipment. And of course the technique will still need to go through much larger clinical trials. However, the team hope that within the next few years, iKnives will improve surgeons’ precision and patients will only need to go under the knife once.