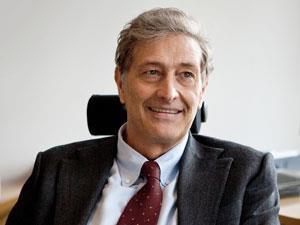 Guido Rasi became executive director of the European Medicines Agency (EMA), the central healthcare watchdog for the EU, in November 2011. A physician by training, he was director general of the Italian Medicines Agency before taking the top job at the EMA.

His five-year appointment comes during a period of dramatic change for the pharma industry, which is struggling with patent expirations for many of its biggest selling drugs and a paucity of new drugs coming through the pipeline to take their place. But there are positive signs, Rasi says. In particular, drug makers are engaging with regulators at a much earlier stage of drug development to talk about safety and quality. This is leading to much greater trust – in both directions – and can only be a good thing for patients.

Asked about the impact of generics on the traditional pharma industry, Rasi says only that such drugs ‘have a legitimate place in healthcare’. The old R&D model does not work anymore, he adds. This has caused the flow of so-called innovative medicines to dry up – the pharma industry needs to rethink its strategy. Where will the innovation come from in future? ‘The industry will have to consider the change in demographics and look more into chronic diseases, personalised medicines, use of biomarkers and subgroups.’

Back at base camp

Such healthcare industry trends are reflected in the challenges facing regulators, including the EMA. In recent years, pharma companies have outsourced more and more of their manufacturing to parts of the world where costs are lower, such as India, China and Brazil. Indeed, Rasi says that 90% of active pharmaceutical ingredients (APIs) are now sourced from outside the EU. This has presented the EMA – as well as its equivalents in other developed regions, such as the US Food and Drug Administration (FDA) – with a dilemma. The EMA has a duty to ensure the quality of all medicines entering the EU market, regardless of where they are made. But it has no mandate to regulate companies in the emerging market regions, where there is typically less experience of pharma manufacturing and quality assurance systems can be far less robust.

To cope, the EMA is sharing the burden of site inspections with its international equivalents, such as the FDA, says Rasi. But he is also looking forward to new legislation that will come into effect in 2013 to protect patients and consumers from fake drugs. What overall role should the EMA provide here? Rasi says that its role in ‘introducing harmonised safety and strengthened control measures across Europe remains to be defined’.

Looking to the future, Rasi is hoping to make the EMA much more transparent by making its raw data available to the healthcare community – including assessors and researchers. ‘We think that opening up these resources will benefit drug development and patient care,’ he says.

He’s also interested in reaching out to the public, which often misunderstands the role of the EMA. ‘People think that we evaluate all medicines in use in the EU,’ Rasi says. ‘The agency is involved in the scientific evaluation of the hundreds of medicines that fall within the scope of the centralised procedure.’ This includes drugs for treating many problems, including HIV–AIDS, cancer and diabetes. But thousands of other medicines are marketed in parts of the EU as a result of authorisation by individual member states or groups working together. ‘The agency only becomes involved in the assessment of such medicines when they have been referred because of a disagreement between two or more member states about the authorisation or use of the medicine, or because some other issue that requires resolution in the interest of protecting public health has arisen.’ In addition, people often think the EMA sets drug prices or makes decisions about availability in relation to national healthcare providers. This is all done at the national level, explains Rasi.