James Crowley: Magicians rings and dumbbells on a molecular scale 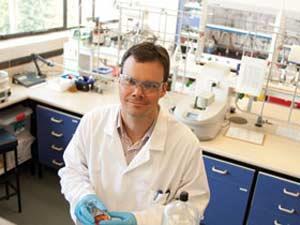 James Crowley is a senior lecturer at the University of Otago in New Zealand. Research in his group combines synthetic organic, inorganic, organometallic and supramolecular chemistry to design and synthesise new functional materials.

Some of your research involves mechanically interlocked architectures. Can you explain the basics of what they are?

Mechanically interlocked architectures (MIAs) are a class of molecules in which the components are linked together by a mechanical bond.1 The two most common types of MIAs are rotaxanes and catenanes. Catenanes are comprised of two (or more) macrocycles linked together mechanically, similar to a magicians rings. The macrocycles are free to move relative to each other but they cannot be separated unless a covalent bond in one of the macrocycles is broken. Rotaxanes are similar but are composed of a macrocycle which has a dumbbell shaped unit threaded through its cavity.

How do you go about making them?

The synthesis of mechanically interlocked architectures usually requires template methods, in order to generate reasonable yields of the interlocked molecules. Supramolecular interactions (eg hydrogen bonds and p–p interactions) and metal ions have been used as templates in the formation of MIAs. As we are interested in the development of functionalised MIAs we exploit the copper(I)-catalysed azide–alkyne cycloaddition active-metal-template (CuAAC-AMT) method developed by Leigh and co-workers to generate our interlocked systems.2 In the AMT method the metal ion has a duel role: it acts as a template for entwining the components and it helps mediate (or catalyse) the formation of the covalent bond that captures the interlocked structure.

Can you give me an example of what you’re working on at the moment?

MIAs are commonly exploited to develop molecular machines3 due the ability of the interlocked components to move relative to each other. We have been attempting to use CuAAC-AMT methods to develop functionalised [2]rotaxanes. Our end goal is to use these functionalised [2]rotaxanes as building blocks for the generation of interlocked polymers that can act as molecular actuators by extending then contracting when exposed to a stimulus.4Our initial system only yielded short oligomers5 but inspired by work from the Goldup group6 we have recently generated smaller, more rigid, functionalised [2]rotaxanes7 which we hope will polymerise into higher molecular weight materials. If that proves successful then we will attempt to use these methods to generate stimuli responsive polyrotaxane actuators.

What kind of applications do you imagine these molecules having?

What is the next big challenge in your field?

Chemistry has an image problem, the only time the public sees chemistry in the news it is for the wrong reasons (environmental pollution or cancer causing industrial chemicals). So a big challenge for the area is to convert one of these amazing MIAs into a useful material/product which would show the public how cool and useful chemistry really is.

Anywhere, the literature, conferences, science fiction, my students and my family have all provided ideas (some better than others). We are always on the lookout for cool ideas for exciting (useful) new molecules.