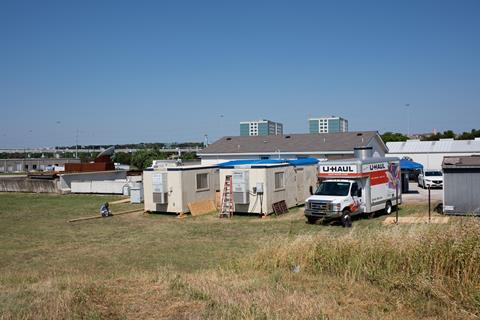 The largest-ever field study to observe how chemicals behave in indoor air has drawn to a close in the US. $4.5 million (£3.4 million) of analytical chemistry instruments, together with scientists from 20 different research groups, travelled to Texas to spend June crammed inside a small home, and four nearby shipping containers, collecting data about the chemistry of the air inside the house.

Knowledge of indoor air pollution – and any associated heath risks – is historically poorly understood compared to outdoor air. This is nonsensical as, in the developing world, we spend around 90% of our lives cocooned inside buildings or vehicles. Funding for indoor research is hard to obtain, in part thanks to the misconception that air pollution is solely an outdoor problem. Only a small number of indoor field measurements have been collected previously, usually looking at a few chemicals with a couple of instruments.

This project – HomeChem (House observations of microbial and environmental chemistry) – is funded by the philanthropic Alfred P Sloan Foundation as part of a decade long initiative to boost understanding of indoor environments’ chemistry. ‘HomeChem is unique in terms of the types of measurements that are being performed specifically to investigate the chemistry that’s taking place in the house; not just concentrations of particular chemical compounds, but really trying to understand how they interact with each other and drive chemistry and chemical reactions indoors,’ explains Marina Vance, HomeChem co-lead from the University of Colorado Boulder.

HomeChem took place at a test house owned by the University of Texas at Austin. Some days researchers carried out discrete activities such as cooking, cleaning or simply occupying the house, while peers collected data on chemicals emitted and how they changed over time. Other days a succession of cooking and cleaning activities was observed. 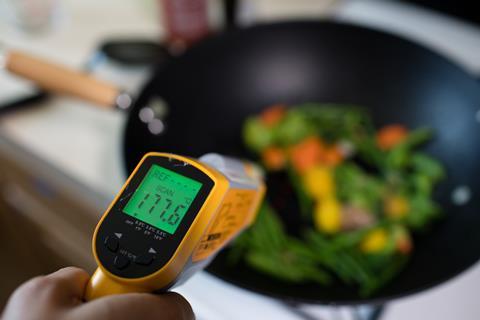 Researchers also mimicked a traditional US Thanksgiving day. ‘Thanksgiving is a complex day, because you have cooking activities going on, a little bit of cleaning, and then a bunch of guests arrive at your house,’ Vance says. ‘It turns out that there’s some really surprising chemistry happening,’ says her HomeChem co-lead Delphine Farmer, from Colorado State University. ‘We expected to see organic molecules, from things like Maillard reactions produced in the [turkey] roasting process, and we see those and that’s great. But then what we didn’t expect was that when a day or so later, we did a different experiment where we mopped the floors that we would then see another burst of molecules [from the roasting process] in the air,’ she explains.

Species measured during the study include organic carbons, chemical oxidants (such as ozone, chlorine and NO3 radicals) and reactive nitrogen oxides such as NOx and nitrous acid. Instruments used to probe the air ranged from simple particle counters and ozone detectors to state-of-the-art extractive electrospray ionisation time of flight mass spectrometers. The chemicals that settle from the air onto surfaces were also looked at; samples were collected on pieces of glass and painted surfaces placed around the house.

HomeChem may be packing up, but the hard work is only just starting, explains Farmer. ‘The next stage is data analysis and then quality controls to make sure the numbers are accurate.’ Data collected from indoor environments is always complicated, due to vast numbers of species and different emission sources present. The tight control of the test house’s environment will make these data easier to understand than those collected in ‘standard’ field campaigns such as when instruments are taken into schools. As will the vast amounts of different data being collected. ‘The more things you can measure, the easier the interpretation,’ explains Dwayne Heard, atmospheric chemist at the University of Leeds, UK. ‘They really have got an impressive wide range of instruments; all the important [chemical species] are covered,’ he adds.

‘After quality control, the data will be shared with the modellers,’ says Farmer. HomeChem is working alongside a collaborative team of computer modellers, comprised of six research groups. This close interaction between the experimentalists and modellers mimics how things have worked in outdoor atmosphere chemistry research for decades, explains Heard.

The HomeChem team view their experimental data as a starting point in the understanding of indoor air chemistry. ‘The main point of HomeChem  is to open the can of worms,’ explains Vance. ‘I anticipate that many of the investigators, after digesting their results, will design experiments back at their universities to clarify observations made during HomeChem ,’ says Charles Weschler, Rutgers University professor and HomeChem advisor. ‘I also expect that HomeChem will lead to a sequel – HomeChem II. This was the first attempt to conduct such a field study, much has been learned that will aid in designing the next study.’

Nina Notman’s visit to HomeChem was sponsored by the Alfred P Sloan Foundation.