Researchers in Europe have reported a mechanically-interlocked molecular system that can reversibly switch between being a rotaxane and a catenane. 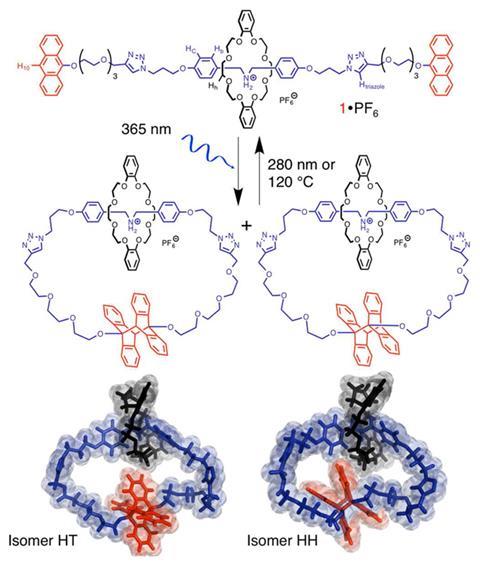 Interlocked chemical rings, or catenanes, and macrocyle-threaded-on-a-dumbell type structures called rotaxanes are two types of mechanically-interlocked molecules that are inseparable not because of some covalent tether, but as a result of a non-covalent linkage. Synthesising a rotaxane is fairly simple. Synthesising a catenane is harder. Synthesising a rotaxane that turns into a catenane is harder still. And for such a transformation to be driven by light is virtually unheard of. But Alberto Credi, of the University of Bologna in Italy, and colleagues have shown that light is all they need to dimerise the anthracene stoppers on a [2]rotaxane to give a [2]catenane.

This breakthrough, the researchers say, could be useful for making nanoscale devices with photocontrolled properties.