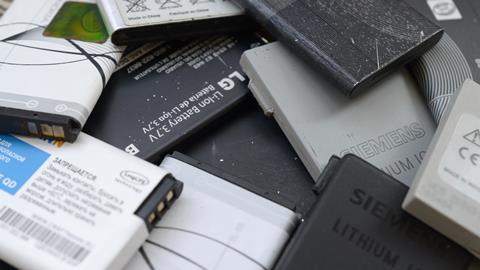 Researchers use in operando x-ray diffraction to probe intercalation mechanism

Producing new lithium-ion batteries is becoming more challenging due to the cost and limited supply of raw materials. Current recycling strategies only generate recycled compounds rather than functional materials, and most of those strategies deal with cathodes rather than anodes.

The new strategy proposed by Xing-Long Wu’s team at Northeast Normal University is not only a simple way to recycle graphite from lithium-ion battery anodes – the researchers also use the resulting graphite in sodium-ion and potassium-ion batteries. Producing these next-generation batteries has its advantages, as sodium and potassium are more readily available than lithium, and the batteries don’t need to contain unethically sourced cobalt.

Central to the new recycling strategy is a simple thermal decomposition process. The researchers scrape graphite anode powder off the exhausted anodes, stir in ethanol, centrifuge, and dry into a powder. They then calcine the resulting compound at 700°C, 1000°C, 1300°C and 1600°C for four hours under an argon atmosphere to obtain recycled graphite, which they use in new anodes. 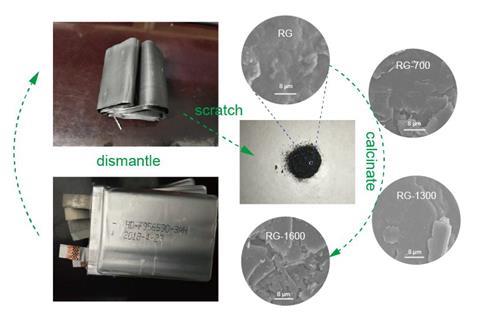 Nuria Tapia Ruiz, who researches the fundamental chemistry of lithium-ion and sodium-ion battery technologies at Lancaster University, UK, describes the work as thought-provoking. ‘The increasing demand on lithium-ion batteries for electric vehicles and electronic devices has posed an additional problem to the initial and exclusive thought of finding good-performing and long-lasting batteries. Recycling materials is an emergent area of research, which may undoubtedly contribute to a sustainable future with reduced waste,’ she says.

Although this is a promising concept, graphite is a more favourable anode material for lithium-ion batteries than sodium-ion and potassium-ion batteries. To gain a better understanding of the reason behind this, Wu’s team studied the recycled anodes in the new batteries using in operando x-ray diffraction to reveal the structural changes of graphite during sodium and potassium ion intercalation. They discovered that an irreversible phase transition of graphite during ion intercalation contributes towards capacity decay. They hope that this new insight will help improve the performance of these anodes in next-generation batteries. ‘In brief, this work lays the foundation for perfecting the reuse of spent batteries, and the development of graphite in emerging secondary batteries,’ says Wu.

While Wu’s group only apply this strategy to graphite, they aim to work on recycling and reusing other exhausted materials from lithium-ion batteries soon. ‘We hope that the severe problems that result from these waste materials are resolved in the near future.’