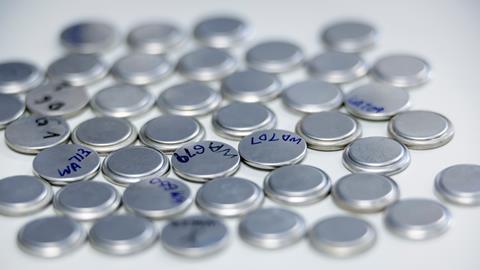 Cooking up sustainable battery materials in the microwave

Simple and sustainable routes to making better anodes for rechargeable batteries are being cooked up by chemists at St Andrews University, UK.

A team led by chemist Robert Armstrong has been working to improve the range of anode materials available for sodium-ion rechargeable batteries. These batteries could rival lithium-ion batteries, and can be made from a much more sustainable and cheap source – salt.

But in an attempt to find a more sustainable route to these battery materials avoiding conventional solvents, Armstrong and his team turned to other ways of making reactions happen. One of these was to use microwaves. The team aimed to make the model anode compound sodium naphthalene-2,6-dicarboxylate (Na-NDC) as a proof of principle. They stirred naphthalene-2,6-dicarboxylic acid and sodium hydroxide with a small amount of ethanol as a solvent in a sealed tube while microwaving it. After 10 minutes, the reaction was complete and the anode material was cooled and dried.1

The Na-NDC was tested for its electrochemical prowess. To do this, the material was mixed with a binder to form an electrode. Different binders were tested, with water-based ones being preferable. When the binder used was carboxymethyl cellulose, the resulting anode material had a particularly high coulombic efficiency, which shows promise for commercialisation, Armstrong says. ‘They’re not good enough to go into a commercial device at the moment, the drawbacks are mainly low electronic conductivity,’ he says. This means that to make a workable anode, lots of conductive carbon must be added, and this leads to a low energy density, he adds. Armstrong hopes that by developing different composite materials, this will improve. ‘It performs at least as well as similar materials prepared by conventional means,’ Armstrong says of the Na-NDC.

Armstrong’s team also recently published another simple anode synthesis technique, using mechanical stirring to get the reaction to proceed, producing sodium carboxylates.2 This mechanochemical method took around an hour, and needed no solvent.

Sodium battery manufacturer Faradion in Sheffield, UK, is collaborating to test both the microwave and mechanically-made materials, once Armstrong and his team have prepared enough anode material to make a workable device.

The advantage of making the anodes with organic materials is their ability to be easily altered. ‘There’s so much scope for tunability,’ says Armstrong. Using methods like microwave and mechanochemical synthesis adds to the sustainability of the resulting battery.

Serena Cussen at the University of Sheffield, who uses microwave synthesis to investigate other battery components, agrees. ‘Organic based electrodes present a potentially more sustainable alternative to some of their inorganic counterparts, which face supply chain or environmental impact concerns,’ she says. ‘There is also the attractive possibility of fine-tuning electrochemical potential through the structural flexibility afforded by organic active electrodes.’ Challenges remain in making microwave synthesis work at scale, she says, but adds that ‘microwave routes are an exciting prospect for more sustainable manufacturing of energy storage materials.’