Researchers say that they have made the first ever direct measurements of the strength of the tiny van der Waals forces passing between individual atoms. At the University of Basel in Switzerland they studied interactions between isolated atoms of the inert noble gases xenon, argon and krypton using ultra-sensitive low-temperature atomic force microscopy (AFM). The forces are ‘an order of magnitude or more smaller than we’re used to measuring and calculating’, emphasises team member Adam Foster from the University of Aalto, Finland. ‘This was really challenging.’ 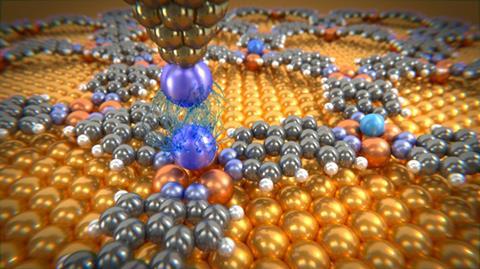 © University of Basel, Department of Physics

Though weak compared with covalent bonds, van der Waals forces are fundamental for the function of biological systems and define the properties of many organic compounds

While noble gases’ stability as lone atoms makes them ideal to study one-by-one, their inertness makes them difficult to secure in place. The scientists therefore bound them to the surface opposite the AFM probe using a two-dimensional metal–organic framework (MOF). Foster says this is the most important aspect of the work. ‘We can use this templating to measure the forces of almost anything,’ he stresses.

To measure van der Waals forces between two atoms the scientists also had to fix one to the AFM probe – and this proved to be tougher still. They moved the probe over a noble gas atom, and repeatedly lowered and raised it, until a change in the AFM reading indicated a successful fishing expedition. Yet this was only possible with xenon, in which the larger electron cloud surrounding the nucleus is fractionally better able to interact with the probe tip.

The researchers could then bring the xenon atom on the probe up to partners on the opposing MOF. The weakest attractive energy was with argon as a partner and the strongest with another xenon atom. In each case the attraction was stronger than expected than from van der Waals forces alone, with the largest discrepancy in xenon. Foster emphasises that even in noble gases other attractive forces play a part, with xenon especially susceptible for the same reasons that keep it on the probe.

Bart Hoogenboom from University College London, UK, calls the study a ‘very nice demonstration of the exquisite control that can be achieved over single atoms’. However, Hoogenboom, who’s a lead scientist for AFM facilities at the London Centre for Nanotechnology, notes that there’s a long way to go to apply these measurements. ‘Many important van der Waals interactions occur in aqueous environments, in particular in living matter,’ Hoogenboom says. ‘It is still quite a jump from these measurements, done in a vacuum, to more real-life environments.’